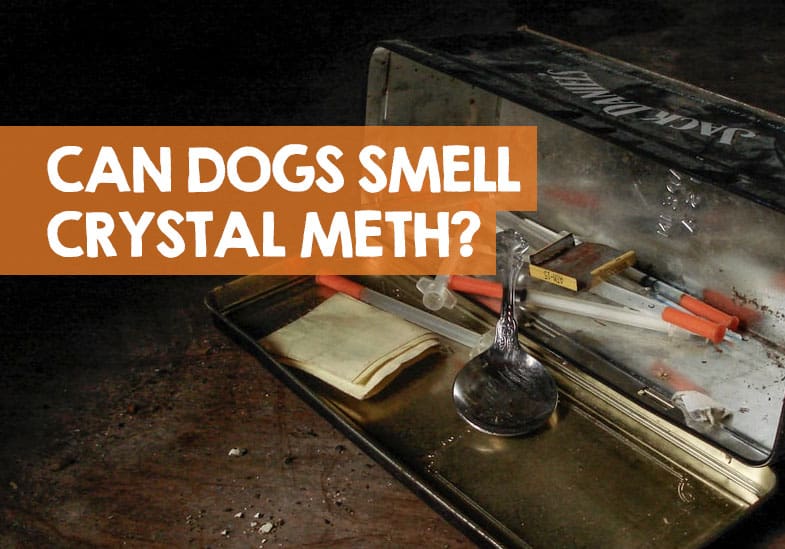 Dogs are on the frontline of law enforcement around the globe, being trained to detect and sniff our various narcotics for police, customs, and border patrol teams. The reason dogs are so good at this job is due to the 300 million olfactory receptors in their nose.

This gives them an amazing sense of smell which is often estimated to be 10,000 times more accurate than a human smell. Their sense of smell coupled with being trainable, makes them a key tool in the fight against crime.

But are police sniffer dogs able to smell for meth (crystal methamphetamine) and various derivatives of this banned drug? I decided to find out what the truth was, so spent time watching videos and reading articles by police handlers who work with sniffer dogs.

Drug dogs can smell methamphetamine, but whether the particular dog will have been trained to sniff out crystal meth and alert the police handlers is another matter. Drug dogs are trained for specific smells such as explosives, narcotics, money, or even certain objects.

The bottom line is, police dogs can smell anything they have been trained to. For example, research published in 2019 found they dogs can accurately sniff out cancer in blood. If dogs can smell cancer cells, they can certainly smell meth and methamphetamine derivatives.

Are drug dogs trained to smell for cystal meth?

Most drug dogs used by the police or at airports should be able to smell for meth. I read a transcribe of an interview with an American police dog handler who said the following:

“Our drug dogs can smell crystal meth as it’s one of the big 5 controlled substances we train dogs for. Police and airport sniffer dogs are trained to stay ahead of illegal drug manufacturers who will often change the chemistry of drugs for concealment purposes. This means that since drugs like meth have derivatives sharing a common base, this base smell is what makes them similar to our dogs. As a result, methamphetamines have a readily identifiable olfactory signature that drug dogs can detect up even if you attempt to disguise it using other substances.”

The bottom line is, drug dogs will be trained for meth, and will be able to detect variations on the drug.

Did You Know? Drug dogs are able to smell narcotics in vacuum sealed bags, and not always for the reason you might think. You can click here to see how.

You will read countless reports and forums posts from people who haven’t been detected when carrying crystal meth. The dogs are not 100% fool proof with sniffing out methamphetamine. But generally speaking, they are extremely good at it.

For example, the smell of meth is very potent, and humans can easily smell it when up close. Given that a dog’s sense of smell is thousands of times better than ours, unless the crystal has been concealed very well, there’s every chance a police dog could smell it.

Even if the dog isn’t trained to smell for meth, it might still sniff out the crystal as an unusual smell and alert the police handler.

“Nothing can disguise the smell of methamphetamines as the airport sniffer dog has been trained for it. We have dogs who can detect a wrap of crystal at the bottom of full 55 gallon barrel of gasoline. They can even smell through vacuum sealed bags as the drugs will seep through microscopic holes in the plastic.”

Just like police dogs, if the airport drug dog has been trained to sniff and detect for methamphetamines such as crystal, then they will be able to smell for meth.

However, I read an interview with an airport worked in the United States who said that many of the dogs working at airports inside the US, were trained for explosives only.

How true this is, I don’t know, but it would mean that on domestic flights, dogs could only be trained to smell for explosives, but on international flights it would be very different.

Dogs can smell out and signal for anything they are trained to do. If police or airport wanted to train their sniffer dogs to smell for meth it would require the following process:

In the training game, actual real drugs are used, but incredibly low amounts used in training due to their amazing sense of smell. Dogs are trained to locate the smell, sit down and point with their noise where it is.

Given that we now know that is it possible for dogs to be trained to smell for methamphetamines, plus how powerful their sense of smell is, then of course they should be able to smell liquid versions disguised as water.

In fact, there was a recent press report where a drug dog alerted to meth when a US teenager tried to struggle liquid meth in water bottles over the Mexico border.

“An 18-year-old man tried to walk from Mexico into the U.S. The teenager declared three cases of bottled water; he was flagged for a secondary screening by Customs and Border Protection officers. A drug-sniffing dog alerted to the presence of illegal drugs and a subsequent X-ray of the bottled water revealed what was described as a dense liquid.”

It happens more often than you would think, as this other report in the Daily Mail reveals.

Another stimulant that will often be abused is methylphenidate, more commonly known as the brand name of Ritalin. I cannot say for sure, but I would guess that unless the dog has been trained to detect, it’s unlikely the police sniffer dogs can smell for Ritalin.

Dogs have been trained to smell for drugs and explosives for years and have an amazing reputation for doing so. You will often see crime fighting pooches working at airports, festivals, or with police handlers to help sniff out a wide range of narcotics.

Even those who are not trained as police dogs to sniff out meth, that doesn’t mean they won’t smell it, given how some can also alert on unusual odors.

I regularly investigate the special skills that dogs have, some of which you might find of interest below.