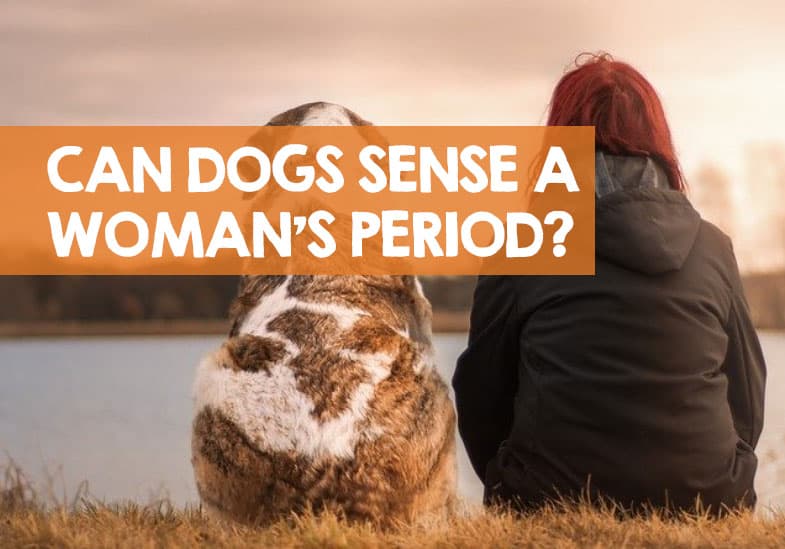 Dogs are renowned as being crotch sniffers, and this anti-social habit can be problematic for menstruating women when on their periods. It’s an issue frequently discussed on pet forums, where women relay stories of their dogs seemingly being more attracted to smelling their crotch areas whilst menstruating. But why is this exactly?

I decided to look into the science and research behind it to find out whether dogs can sense female hormones, and if they really do know when a woman is on her period.

Can dogs smell a woman’s period?

Dogs can smell a woman or girl on her period due to the amazing sense of smell which is said to be 10,000 times stronger than a human’s. Dogs have 300 million olfactory receptors in their nose meaning when women menstruate, dogs can be attracted to the pheromones and hormones produced.

So, that’s the simple answer. But it’s doesn’t really explain why and how dogs are attracted to period blood and hormones. There are studies though which can go some way to providing an explanation which I will report on further down the page.

Handy Hint: Dogs can get ill if they manage to lick human blood.

My dog acts weird when I’m on my period

When women menstruate, dogs know that something is different is happening, but not necessarily what. For them, it’s clear that something is out of whack, or that you are in pain, and this will account for their weird behavior around you.

Stories given by women on their period include accounts of dogs trying to hump them, lay down on them, acting aggressive or weird, or simply trying to smell the woman’s period at any available opportunity.

Dogs, as we know, have an amazing sense of smell. Studies have found that their smell is so good that they are able to detect cancers (see how), UTIs, and migraines in humans.

It stands to reason then, that dogs can smell a woman’s period, as they are able to detect menstruation by the odor and hormone levels being produced each month.

By why would the smell of a woman’s period be so interesting to a dog and result in them acting weird around you?

Well, it’s all down to how dogs are driven by smell and how they detect period blood and hormones. For example, dogs will greet each other by sniffing each others’ butts. Smell is how they get social information about other dogs, but also people.

When the apocrine glands give off the pheromones, this gives dogs lots of information about the gender and mood of the other dog, and even whether the other animal is ready and available to mate. In other words, male dogs smell genital areas to see whether females are pregnant or ovulating.

Like dogs, human females will also be releasing more pheromones and hormones than usual during menstruation. To dogs, your menstruation smells different to how you normally do, and therefore it’s very interesting. They will sniff you get as much information as they can about what’s going on.

And how they detect the pheromones from the apocrine glands is very interesting. It’s all to do with something called a vomeronasal organ. Here’s a medical explanation of what that is:

“The vomeronasal organ (VNO) or Jacobson’s organ is an auxiliary olfactory sense organ in many vertebrates. This organ is involved in the Flehmen response and it is necessary for the detection of pheromones, chemical signals released to members of the same species for social and sexual communication.” (view source)

In simple terms, the moment a female starts producing pheromones, a male dog will be able to sense, smell, and detect the period.

What a scientific study found

Professor Stanley Coren has written an amazing book called “How Dogs Think” (see it on Amazon) about dog behavior. In the book, Coren describes a study involving Australian Shepherd  dogs and cows. The dogs were trained to detect whether the cows had recently ovulated, and it produced stunning results.

The dogs were able to successfully detect cows in the herd who had just ovulated. This let the farmers predict ovulation and improve their breeding processes.

Whilst no similar studies have been conducted to see if dogs can smell women’s periods, you could probably assume that similar results would be produced with humans.

Handy Hint: Did you know that there is some evidence to suggest that pigs are actually better at smelling things than dogs can?

Why does my dog lay on me when I’m on my period?

There’s another theory that dogs don’t really know what the change in a woman is when she is on her period. After all, human pheromones will probably appear very different to a dog, compared to dog’s hormones.

But the dog will know there’s a change going on in the woman due to their highly developed sense of smell. That could mean that your dog is laying into you for cuddles when you are on your period simply because they detect a physiological change in you which makes them anxious.

Evidence suggests that dogs look on their human owners as their parents. With that sensitive sense of smell, any change in you due to menstruation could make them feel insecure. Its’ no wonder they then might want your love and comfort.

Why does my dog try to hump me when I’m on my period?

There’s another theory that the pheromones produced during a woman’s period is possibly enticing to a dog, perhaps being similar hormones to those that dogs detect in other dogs.

The bottom line is that the human body gives off hormones that can trigger behaviors in dogs. If the humping period is isolated to happening once a month when a woman is on her period, then you have to assume it’s related.

My dog is more aggressive when I’m on my period

There are a couple of theories here on why dogs are more aggressive when their human owner has a period, based on the gender of the dog.

For example, if your female dog is aggressive when you’re on my period it could be down to classic threat based behavior. If your dog feels threatened, it can turn on you. Female dogs are seen to be aggressive toward younger female dogs that are ovulating and can extend that behavior towards human women.

If your male dog is more aggressive when you’re on your period, this again could be threat based behavior. Instead though, the aggression is shown towards other people coming near the woman. It’s possible alpha behavior where the dog is inclined to protect dogs coming into season and ovulating.

How to stop crotch sniffing

Now we have a better idea of why dogs can sense women’s periods, you might want some tips on how to stop this unwanted behavior. I’ve scoured the web looking for the best advice from dog trainers.

Here’s a short synopsis of what they say you should do if your dog is trying to smell your period and nothing else will work:

If your dog is trying to smell the crotch and period of guests in your home, they won’t have been able to master this training yet. Ask them instead to use their hand to gently palm the dog’s nose away from their crotch.

You should then step in and distract the dog with something more interesting.

Whilst there is no definitive proof that dogs know when you are menstruating, it would seem they are able to pick up on changes in hormones and can act when you’re on your period.

Based on what I found and the scientific study, you would have to assume that dogs can smell when a woman is ovulating and can sense when you are on a period.

Your dog’s sense of smell can help them do all sorts of amazing things. For example, they are used by law enforcement to fight crime, as you can see below.