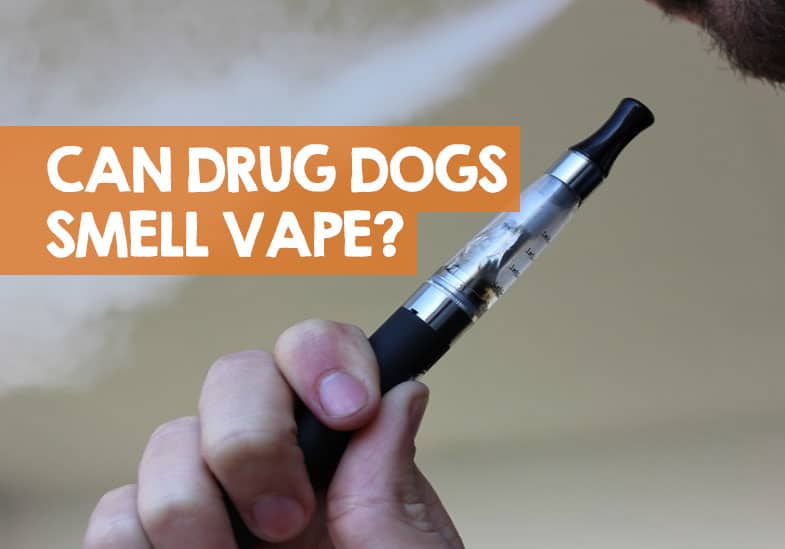 Dogs have an amazing sense of smell and can be easily trained. This is why they are used by so many law enforcement agencies around the world including police, border officials, and customs. With 300 million olfactory receptors in their nose, they are said to have smell that is 10,000 times than humans do.

The thing with drug sniffer dogs is that they are all trained to smell for specific scents. This means a dog can be trained to detect almost anything, providing it has a scent. Based on this, here’s the short answer followed by more detail on drugs being able to smell for vape pens.

Can drug dogs smell vape pens? Drug sniffer dogs can smell for vape cartridges and pens depending on what’s in the juice and cartridge. Police dogs can signal to detect what they have been trained for, which can include cannabis and nicotine with some law enforcement agencies.

The bottom line is, if you have vape juice with a substance in it that dogs are trained to detect, then the dog will smell, no matter how well the scent is disguised.

Police dogs have been trained to smell for things like micro SD cards, so sniffing out a vape cartridge is not going to be difficult for them. But it’s all down to whether the dog has been trained to or not.

Let me explain why and how this all works.

According to police dog handlers and customs officials I have read interviews with, drug dogs are only trained to detect between two and five different substances.

This means that if a police or customs dog has been trained to smell for cannabis or THC and this substance is contained in a vape juice cartridge, the dog can still detect and signal for it.

Similarly, if customs dogs have been trained for detect nicotine, they will smell vape pens with nicotine juice in it. This is more common at customs and borders where the smuggling of tobacco is checked for.

Even if the substance such as cannabis, weed, and THC is in liquid form and mixed in with nicotine vape juice, drug dogs may still be able to detect for it. It’s because sniffer dogs are able to separate odors that are mixed up. For example, when a human smells stew, they just smell stew. When a dog smells stew, he can differentiate between the odors of all the ingredients mixed in together.

Even if the dog can’t smell through the cartridge of glass of a vape pen, they will likely smell the illicit substance on the fingers of the person on the outside of the vape.

Drug dogs are only trained for a few different substances each

However, just because drug dogs can smell vape pens it doesn’t mean they will… which is all down to their training. Most drug dogs will have been trained to focus on the drugs and substances that are of the biggest concern to airports and police.

That means things like amphetamines and explosives, and those considered to cause the greatest harm or have the biggest criminal element to them.

Despite what you might have heard, drug dogs can smell substances that have been vacuum packed. Their sense of smell is so refined, that they also smell vape juice when it’s been put into a cartridge, as will have leaked or be on the carrier’s hands.

The reason why dogs can smell vape, no matter how well it’s been disguised and masked is because:

Here’s a quote from a police officer offer when asked on an online forum whether police dogs can smell vape juice with cannabis and nicotine in it:

“Nothing can disguise the smell of cannabis or nicotine; airport sniffer dogs have been trained for it. We have dogs who can detect a package of sealed drugs at the bottom of full 55-gallon barrel of gasoline.”

How police and customs dogs are trained to detect illicit substances

Now we know how it is possible for drug dogs to smell vape juice with nicotine or cannabis, I wanted to explain why sniffer dogs are so good at what they do.

Did You Know: Sniffer dogs at customs have been trained to smell for tobacco products. You can find out more about how this works in this guide here.

Apart from having an amazing sense of smell, drug dogs have also been trained to make the detection of substances into a fun game that they want to play.

For example, if police or airports wanted to train their sniffer dogs to smell for cannabis in vape juice, it would require the following process:

You will see crime fighting pooches working at airports, festivals, or with police handlers to help sniff out a wide range of banned substances.

I’ve researched these topics at length, watching videos and reading articles by professionals who work with sniffer dogs and have come to the following conclusion and bottom line:

Drug dogs can smell vape cartridges and pens. But whether they will or not depends on whether they have been trained to, and what substance is in the vape juice itself.

If you liked this topic you might also enjoy these reads: