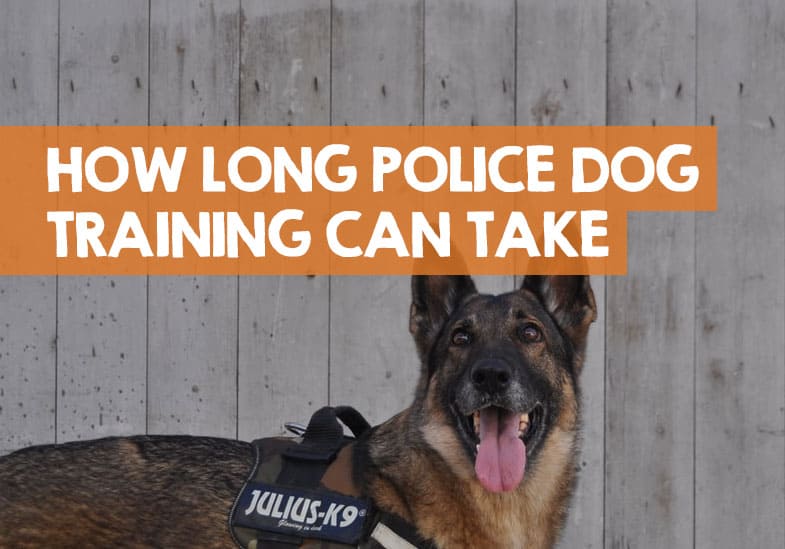 Police forces throughout the US and worldwide use dogs to track down criminals, sniff out illegal substances, search places, or do the jobs human counterparts simply can’t. As you can imagine, it takes a lot of training for dogs to become police dogs.

The subject fascinates me, so I decided to research how much training police dogs need, the age they start, and how long the training takes from start to finish. Here’s what I found – the quick answer first.

There’s a lot more to it than that as you can imagine. Here’s the lowdown on police dog training and how long things can take.

How long does it take to train a K9 police dog?

Naturally, due to the amount of discipline needed for K9 police dogs to become successfully trained, police training often takes a significant amount of time.

In most cases, it takes approximately 4 to 6 months for handlers to complete basic K9 training, however, this can vary quite significantly depending on the dog. As previously mentioned, dogs often have unique personalities and traits, and all these can play a role in how long the training can take.

However, it is worth mentioning that most police dogs will already have had around eight months to a year of training before they are paired with their handler. This usually takes place at special organizations or foundations that raise puppies specifically for law enforcement.

However, some individual trainers and breeders also donate their puppies to police dog training programs.

When a team (consisting of a dog and handler), is deemed ready to start working in public they will have to complete a minimum of 16 hours of training each month.

In addition to this, they will be met with regular evaluations. It often takes police dogs 2 or more years to become exceptional at their job, and sometimes even longer with stubborn but well-meaning breeds.

Furthermore, it is worth looking at the roles that police dogs take in the police force to better understand this. Often seen as the most popular police dog role, apprehension involves police dogs aiding officers in arresting suspects.

Dogs trained in this elite job will bite and hold potential criminals still, regularly putting their lives in danger in the process, so that police can move in and apprehend the suspects.

Due to the violent and unpredictable nature of this job, regular training is a constant part of these dog’s lives, with the only exception being when they are injured or retired due to their age.

The same applies to detection dogs, who are trained to sniff out narcotics, explosives, and accelerants, and search and rescue dogs who are involved in finding kidnapped and missing persons.

It should come as no great surprise that constant training is required to keep these specialized police dogs at the top of their games.

Perhaps the question should be not how long it takes to train a police dog, but instead, how often police dogs need to be trained to stay on top of their game.

At what age can dogs start training to become police dogs?

According to dog trainers who work for organizations centered around training young puppies for law enforcement, the age a dog can start training to become a police dog is actually from birth. Serious police training can start at 8 weeks of age.

When these puppies are born, they are evaluated for any special characteristics that separate them from their peers and are constantly monitored via detailed note keeping.

Additionally, the pups are constantly exposed to new sights, sounds, challenges, and textures, helping the trainers to monitor how they react to these stimuli.

These notes can help trainers to choose a selection of top candidates for law enforcement roles, with less suitable pups being trained in other jobs or given to families. Serious training usually begins at around 8 weeks; however, most pups are introduced to pre-training at 6 weeks.

Did You Know? Some police dogs will be trained to smell deep underwater. In fact, all dogs can smell underwater to some degree.

In pre-training they are taught basic commands such as sit, stay, and lie down and are encouraged to form connections with humans through play. After completing this, they are then ready to move on to more complicated training.

What makes a good police dog?

There is no doubt that without police dogs, some branches of the police would be unable to function as well as they do today.

All year-round, throughout the US, numerous puppies and young dogs embark on a long journey, together with their respective police handlers or owners, to become qualified police dogs.

However, to most of the general public, the ins and outs of this lengthy and sometimes grueling process remain a mystery. Although many answers can be found online, it is sometimes difficult to separate facts from fiction when it involves police dog training.

Although you might have concluded that with rigorous training, any dog can become a police dog, this is not the case. Certain breeds such as German Shepherds make better police dogs than others.

Despite many of us being able to recognize a canine who is well trained, police dogs must have a much higher level of discipline and certain characteristics are needed for them to be considered for the role.

Similar to humans, dogs can have a variety of different temperaments and personalities, and dogs with lazy, nervous, or extremely friendly traits are often not chosen to become police dogs – I know it can come as a disappointing blow when we find out our jovial and chubby English Bulldog or Labrador is not cut out to join the police force, but this is probably for the best.

Handy Hint: In this guide I explain how police dogs know to attack the right person (most of the time).

For example, before being considered for training programs, potential police dogs must possess certain innate qualities that separate them from the rest of the pack. When it comes to puppies, trainers will look for signs of natural interest and curiosity in play and exercise.

Similarly, in both puppies and young dogs, trainers will be on the lookout for intelligent canines with good physical traits of strength and endurance.

Lastly, potential candidates must show a willingness to learn and obey commands, as well as possess a strong hunting instinct – the latter trait being particularly important in training successful police dogs.

It’s no secret that German Shepherds are regarded as the cream of the crop when it comes to police dogs. However, several other types of dogs are extremely proficient at police work, too.

For example, one such breed, the highly loyal Belgian Malinois, is extremely loyal and possesses incredible instincts of protection. They are closely related to German shepherds and are essentially smaller versions of the GSD.

Additionally, Labradors are a popular breed in the bomb and narcotic detection divisions of the police force. Despite their reputations as lazy family dogs, they are great companions for police officers and are often deployed at airports to search for illicit goods traveling through security.

Lastly, American Pit Bull Terriers are one of the newer breeds to join police officers in the field. These fearless canines are known for their confidence, as well as their sturdy bodies and surprising amounts of speed.

Did You Know? Cadaver dogs can start to detect and smell for human remains within just a few hours of death.

Dogs are well known for being man’s best friend and are a constant companion for many of us. However, they are also famous for the abilities they possess in a variety of different roles, such as search-and-rescue, guiding, and drug or bomb detection, amongst many others.

One of the most common jobs canines are suited to is police work. With their limitless loyalty, protective natures, and surprising amounts of intelligence, dogs often make the perfect partner for police officers out on the beat.

Therefore, it comes as no great surprise that many dog owners are curious about how long it takes to train the average dog to become a well-disciplined member of the police.

Similarly, some owners will be interested in finding out whether their puppy has what it takes to become a police dog in the future and if it is a good choice for them to make in the long run.

I hope I’ve answered those questions for you, and if you’re interested, here’s more about police or German Shepherd dogs.