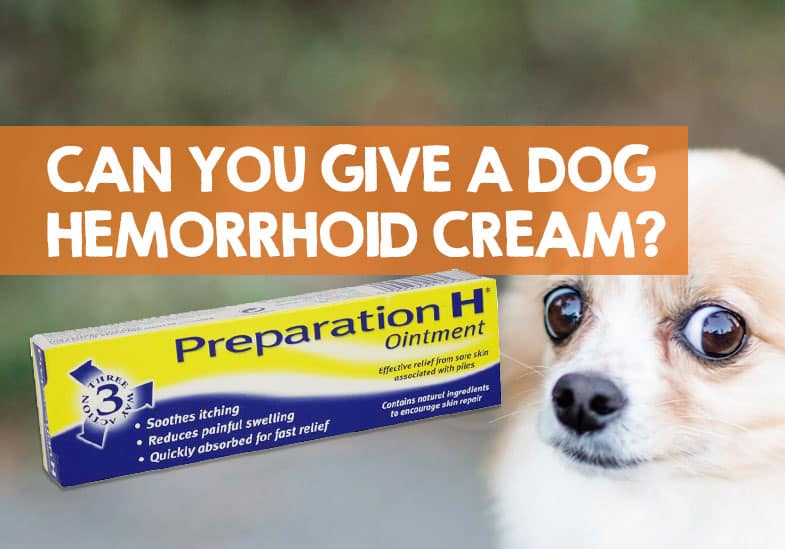 We’ve all seen our dogs scoot their butts across the carpet (usually when we have company). It might be embarrassing for us, but it is irritating and painful for our dogs. It’s no surprise that most people will automatically think the dog has hemorrhoids and consider whether it’s ok to use hemorrhoid cream on a dog.

Based on that risk, plus the fact that human medications should never be used on dogs, I do not recommend that you use hemorrhoid cream on a dog. Your dog could lick it, or it could cause more irritation to them.

Not all hemorrhoid creams are made equal. Some are organic and small ingested doses will not affect your dog, while others are made from inorganic properties and may cause digestive problems.

Can Preparation H be used on dogs?

Don’t give a dog hemorrhoid cream unless a professional vet explicitly says it’s ok to do so. Whilst I don’t believe Preparation H is toxic to dogs, I personally would not be prepared to take the risk without clear vet guidance.

What I’ve done though, is put a list together of what you can use for dog hemorrhoids…

What can use for dog hemorrhoids?

As the likelihood of your dog’s problem being hemorrhoids is slim, it is advisable to consult your vet for a diagnosis. Delayed or incorrect treatment is possibly detrimental to your pet’s long-term health and survival.

Human hemorrhoid creams have evolved from herbal pastes to inorganic compounds. They combat infection, sooth pain and reduce swelling. Similar creams have been developed for dogs and their sore bums.

Neither human nor canine solutions were intended to be ingested. Rather, they were intended for external application only. If they are swallowed in large enough quantities, the creams will have a variety of side effects.

Modern hemorrhoid ointments may cause digestive and respiratory problems, while older herbal remedies, such as witch-hazel, could cause liver damage.

Your dog will mostly lick the area causing the irritation, i.e., where you will be applying the cream. This can be prevented by making it difficult for them to access the area, e.g., with the use of a plastic cone around their neck.

Witch-hazel can be used safely on dogs, but only in small quantities. It has antibacterial and antiviral properties and has been known to be effective in treating hemorrhoids. It also has a dehydrating effect and may cause liver damage if too much is taken orally.

Keep the witch-hazel in the fridge and apply chilled, directly to the dog’s anus several times a day. Small, regular applications will ensure that your dog does not ingest too much at any one time.

Ensuring that your dog stays hydrated will help to soften their stools and cause less strain on the rectal area. This is particularly important for older dogs.

If your dog suffers from constipation, you may think of switching to a more varied diet, with more fibre and a higher moisture content. This will smooth digestion and ease the pressure on the lower bowels.

Pumpkin and oats are good sources of fibre. Dogs do not extract much nutrient value from carbohydrates as they have short intestines. These will pass through the system and make it easier for them to pass stools.

There are veterinary-approved supplements that can add bulk to a dog’s diet and have the effect of softening their stools. Beware of over-the-counter products that are not pre-approved.

What is a hemorrhoid?

Hemorrhoids are swollen blood vessels in the lower part of the rectum or on the anus. They affect around 70% of the human population, at some stage in their lifetime.

Rectal hemorrrhoids are internal, and produce few symptoms. They are usually detected by bleeding or blood in the stools.

Hemorrhoids in humans are caused when undue strain is applied to the rectal tube by the person being overweight, lifting heavy objects or sitting and straining on the toilet for too long.

They can also be caused by constipation which results when a diet is not rich in fibre.

Before hemorrhoid cream was invented in 1935, the standard treatment included the use of laxatives and leeches. Yarrow and witch-hazel are herbal remedies that have been used successfully through the ages.

Ointments that were developed later contained chemicals which act as decongestants, mild anaesthetics and anti-inflammatories. Still later, vasodilators were added to dilate the blood vessels.

All of these remedies are applied externally and are not meant to be ingested, as they will cause a range of problems to the digestive system.

Do dogs get hemorrhoids?

Fortunately, for dogs, they are less likely to suffer from hemorrhoids. Their digestive systems lie horizontally in their bodies, as opposed to that of humans, which lie vertically and therefore cause more pressure on the rectal area.

Canine hemorrhoids are more likely to be caused by a bad diet which results in constipation and a build-up of pressure in the rectal column. This may be a diet lacking in fibre or an unvaried diet consisting entirely of dry food and little added moisture.

They may also be caused by prolonged bouts of diarrhea or other digestive problems which result in the dog itself becoming dehydrated.

Another reason hemorrhoids develop, is due to ageing. A general decline in health causes inefficiency in the digestive and other systems.

Your dog will be experiencing discomfort in the form of pain and itchiness around its anus. It will try to relieve the irritation by biting or licking the area, and possibly the infamous scooting behaviour.

You may also observe your dog straining when it tries to pass a stool, or see little growths protruding from its anus. Blood in the stool may be another indication that there are internal or external hemorrhoids.

If the hemorrhoids remain untreated, they will not only continue to cause tenderness and discomfort but will also give opportunities to bacteria and parasites to take hold, which in turn cause infection.

Hemorrhoids can also be mistaken for rectal polyps. These are small abnormal growths that are found in the mucous membrane inside the rectum. However, they may protrude and be visible outside of the anus.

Polyps are mushroom shaped, with a stem and rounded top. They tend to be small and benign but can grow larger and become malignant tumors. Polyps need to be inspected by a veterinarian regularly for signs of significant change.

When a dog ages or has given birth to multiple litters of puppies, the sphincter muscle in the rectum becomes weak. Part of the rectum may then slip through the anus and become visible. Symptoms of a prolapsed rectum include incontinence and excessive mucous in the stools.

This condition requires medical attention as it may cause infection in the area exposed to the elements. The infection could then spread to the lower bowel.

Perianal fistulae cause general inflammation around the anus and may result in impacted hair follicles and other kinds of infection. This is a painful condition which requires medical attention. The dog will have difficulty sitting and will constantly be seeking relief by licking the area.

Image of dog used in header via https://unsplash.com/photos/MjKUUaYQQ6U