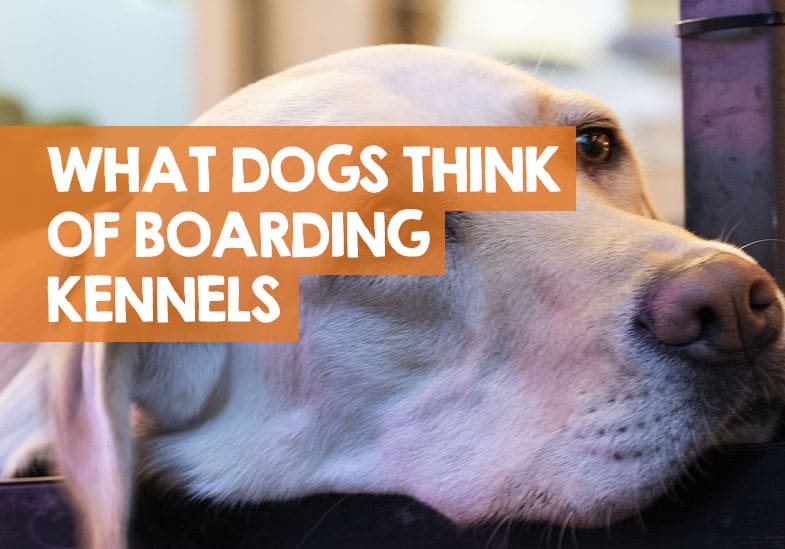 It’s only natural to feel guilty when putting your dog into kennels. After all, they can’t really tell us how they feel about being boarded, so we need to pick up on behavioral clues to guess whether they hate boarding kennels or have had a good time.

There’s no real answer that applies to all dogs. Some dogs like kennels, some dog hate boarding, and the only way you will know is to try it with your dog.

Truth is, if you know your dog’s character, you might already have a suspicion of how they are going to feel about boarding before you drop them off.

There really is no “one size fits all” answer to how dogs feel. Your dog might get depressed boarding, but in most cases, hopefully he will just have a great time.

What I have done is do a poll of dog owners on social media to find out whether they thought their own dog liked boarding or hated it. You can see the poll results lower down the page.

There have also been some studies published into dog boarding and depression, and I will refer to those below to help you make your mind up.

The first study I found is in stark contrast to many other opinions which say dogs get depressed when staying in boarding kennels.

The research, published on ScienceDirect.com, explained how researchers studied 29 domestic dogs in their home environments and how they behaved when in boarding kennels.

They found that dogs were more active when in kennels, and the results could be interpreted as showing that dogs actually liked to be boarded.

Dr Lisa Collins from the University of Lincoln said

“This study suggests that although dogs appeared to have a higher level of overall arousal or excitement in kennels compared with their state at home, this arousal is not necessarily due to dogs experiencing kennels as negatively stressful. Findings appear to suggest that the dogs in this study did not perceive admission to boarding kennels as an aversive stressor and perhaps, instead, perceived kennelling as an exciting change of scene, at least in the short-term.”

Yes, you read that right… dogs could like being in kennels, and rather than being sad and depressed are actually excited by the proposition.

To conclude, the study said:

“Short-term kennelling did not seem to represent a negative stressor for these dogs. The emotional valence of responses was ambiguous, and no definitive evidence was found to suggest that dogs were negatively stressed by kennelling.”

However, this should not be viewed as conclusive, because boarding kennel stress is a real thing, and dog owners all over the world will have seen it.

Do dogs get sad when boarded?

Some dogs will hate boarding kennels and will come back with boarding kennel stress. It’s a fact, because many dog owners see it and talk about it on the Internet.

So, whilst the study I referenced above might show that dogs in the panel of research liked being in boarding, it doesn’t mean your dog necessarily will.

If you have a dog that is prone to separation anxiety or is scared by other dogs, including their sights, sounds, and smells, boarding has the potential to be extremely traumatic.

Do dogs get depressed when boarded?

If your dog has hated boarding, then there is a risk of depression developing. The WebMD.com website say the following signs can appear:

“Dogs will become withdrawn. They become inactive. Their eating and sleeping habits often change. They don’t participate in the things they once enjoyed.”

The RSPCA animal charity also explain that the symptoms of a depressed dog include:

All of the above symptoms can occur in dogs that hate boarding and who come back depressed from the experience.

The reason why your dog is depressed after boarding can be things like:

Is dog boarding good or bad for dogs?

To get some real data from real people, I put a social media post asking people whether or not they thought their own dog got depressed when boarded.

The question was simply; are kennels bad for dogs, and do you think your dog liked or hated the experience. It was a simple yes, no, or unsure vote.

I had 184 responses in total, with the votes coming in as:

Obviously, a survey like this is hard to put any real scientific credence too, as dog owners aren’t dog psychologists, and many won’t honestly know how their dog felt, other than a gut feeling.

Is it traumatic for dogs to be boarded?

For those dogs that have hated boarding kennels, it’s possible they had a traumatic experience whilst there. Kennels vary from establishment to establishment in the way the work and care for dogs, which is why it’s so important to know what to look for in a boarding facility.

However, the majority of trauma is probably going to be due to the proximity your dog is with other dogs. Being close to strange dogs, smelling their smells, hearing them bark and so on is going to be traumatic to certain characters.

If your dog has come back from boarding is acting very differently to his usual personality, then it’s possible he has been traumatized by the experience. Things to look out for include the signs of depression I listed earlier, plus a lack of interest in play, lethargy, and a loss of appetite.

If you see any behavioral changes in your dog after boarding, get them seen by a vet as soon as possible.

So, are boarding kennels bad for dogs?

No, not necessarily. There are some excellent establishments out there and you can do your own due diligence on them by ticking off these questions to ask I prepared.

Knowing that the boarding kennel is a good choice is still no guarantee that it will be a bad or good experience for your dog. A lot of the time it can be down to just one thing that happens, or predominantly the character and history of your dog.

If you think your dog is going to hate boarding, talk it through with the kennel owner. And if in any doubt, see what other arrangements you can make.