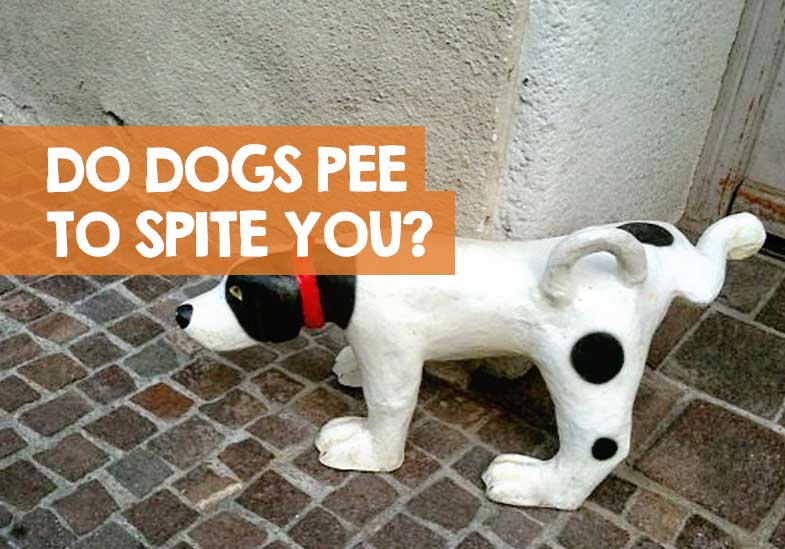 When I was a kid, we had a dog called Larry who was a spiteful pee monster. Or at least that’s what my dad used to call him. Well almost; the words were a bit different. Larry the dog would pee in the house every month or so, usually after he’d been scolded for something.

I’ve looked back on those days since and wondered whether our dog was peeing out of spite, for attention, or just because he was mad with being disciplined by my strict father.

I decided to research what science and dog behavior specialists think about this. Here’s what I discovered about whether dogs pee in the house out of spite or not.

Do dogs pee out of spite? Dogs do not pee to spite you, or when they are mad or for attention and revenge. Instead they will pee in the house to communicate anxiety, fear, health problems, territorial markings, or simply because they have no other option but to urinate indoors.

There’s actually a lot more to it which I wanted to share about why dogs don’t really pee out of revenge or spite. Here’s what studies tell us about dog behavior and why they are peeing in your house.

Can dogs pee out of spite in your house?

Do understand whether dogs pee in the house out of spite you have to place some context around the point in time they urinate. What you are doing is project human feelings onto your dog.

This is exactly what my father would do. He would shout at Larry the dog for something, whether that was stealing food or chewing and shoe. In the next 30 minutes or so, Larry would pee somewhere in our house – sometimes on my parent’s bed!

My father’s automatic reaction was to then shout and scold Larry further, saying that the dog was peeing out of revenge for being scolded initially.

Now, my dear old dad was no psychologist, but I don’t think you have to be in this example.

Our dog was peeing in the house to communicate his feelings. His feelings weren’t of being mad, or spiteful, or vengeful. They were feelings of being afraid, confused, and anxious, which in dogs, can make them urinate indoors.

It was a vicious cycle.

Dog’s don’t understand revenge and are not spiteful creatures

The bottom line is dogs do not understand revenge and will not act of out spite. They have no concept of revenge, as their brain is focused on food, fun, warmth, and survival… in their pack where there is a clear pecking order.

Dogs live in the moment and have a different concept of time to us. It’s not how we might store up a memory and hold a grudge to get revenge later.

According to Science Focus:

“Dogs have a sense of time but probably not a ‘concept’ of time. Human episodic memory means we pinpoint times in the past and look forward to the future. Studies suggest that dogs live very much in the present but, like us, their internal clock or circadian rhythm regulates body processes such as when to go to sleep and get up.”

A dog will not analyze a situation and make the decision he or she needs to punish you out of spite.

Instead, dogs develop separation anxiety, fear, health problems, and territorial marking behaviors which lead them to pee in the house.

Dependent on the timing, you might look on them peeing indoors and relate it back to something you did earlier (in human time) and correlate their action with revenge.

You might believe your dog is peeing indoors out of spite, or to get attention, or because he might be mad.

It’s really not the case.

Here’s all the reasons it could be happening.

Why is my dog acting out and peeing?

If your dog pees in the house, don’t rub their nose in it, don’t shout, don’t hit them. Those actions will make it worse, they will pee more, and it could appear like this is their spiteful revenge.

Instead understand why it’s happening, which could be for the following reasons.

1. Dogs pee out of anxiety and fear

As established with my own childhood memories, our dog Larry was peeing in the house because he was scared of my father’s reactions to his naughty behavior. Not because he was trying to get revenge or because he was mad at us or my dad.

Whilst it might appear the dog is getting you back, particularly if they pee on your furniture, they are not. It’s just their way of communicating.

2. Dogs pee to mark territory or when jealous

Dogs will often become anxious over their territory when a new baby comes into the house, perhaps a new pet or new person. Whilst revenge isn’t a dog emotion, there’s evidence that jealousy certainly is… and that emotion manifests itself with territorial marking.

I read an article on the Scientific American which explains jealously. Here’s a quote, saying:

In fact, it’s not unheard of for dogs to pee on or near their own food bowls when territory is being threatened and they feel jealousy.

3. Dogs pee due to a health issue

Whilst it might appear that your dog has peed in the house for attention or spite of being mad with you, you might want to disregard the timings. It could be the sign of a health issue which you haven’t picked up on.

And it’s no blame on you if you haven’t as they aren’t always obvious.

Handy Hint: If your dog’s pee smells of maple syrup, this can be a sign of canine diabetes.

4. Dogs pee when they can’t hold their bladder

Sometimes the simplest of answers are the right ones.

If you have been out all day, only to come back with dog pee all over your wooden furniture, he’s not urinated out of spite.

It’s very possible your dog was unable to hold his bladder for that long. I wrote a different article about how long dogs can hold their poop and pee which offers some guidance.

And the most obvious for last; your dog hasn’t been properly house-trained to not pee in the house. Is it really any surprise that your puppy has left urine on the floor?

So, don’t shout. It wasn’t a spiteful or vengeful act… just a case of not knowing the proper rules yet.

When dogs pee indoors it’s to either communicate a feeling such as anxiety, because they had no choice, or due to health problems.

They don’t understand the concept of revenge.

They are not spiteful creatures.

They are not peeing to get your attention.

Try to look at the bigger picture before making a judgement call like my father used to.