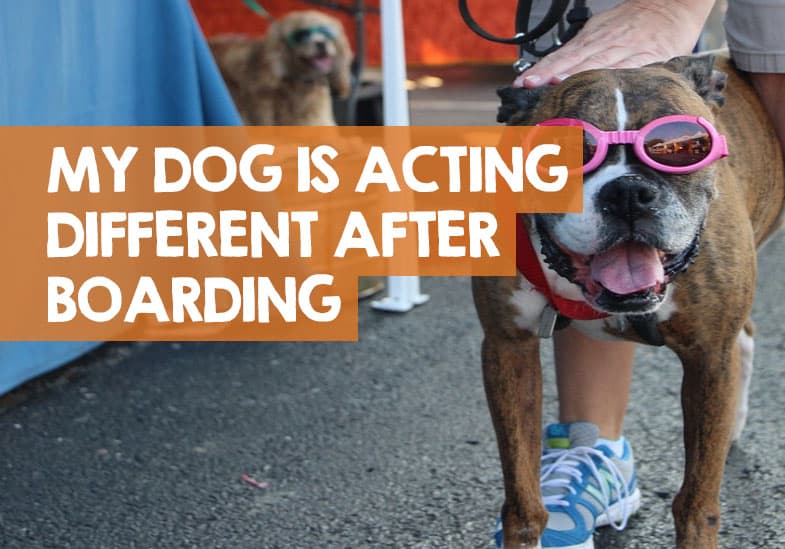 A stay in boarding kennels can affect different dogs in different ways. Some will love the experience and almost view it like a vacation, others will return home acting differently. You might have a timid dog who goes into kennels and thrives, or a confident dog who comes back having had a negative experience.

Often the negative dog behavior after a kennel can be quite extreme. Symptoms such as aggression, lethargy, acting distant, ignoring you, shaking, and not eating amongst the more worrying aspects.

But here’s the thing; why your dog is acting different after boarding could have a huge range of reasons. I will try to outline those here today, and then explain when you should talk to your vet.

As well as my own personal experience of boarding our dog, I’ve also canvassed other pet owners on social media. That has resulted in what I believe to be the most common dog behaviours after kennels shown below, with possibilities to what it could all mean.

There are all things that can happen when a dog comes home from boarding, resulting from a possible negative experience when away.

1. My dog is ignoring me after boarding

If your dog is ignoring you after boarding or acting distant after your vacation, you can probably forgive him for doing so. This behavior after a kennel stay is classic but can often mean one of two things; either it’s stress-related or your dog is sulking.

The sulking behavior is kind of funny. Your dog has probably taken offence you left him at the boarding kennels and went off probably having loads of fun without him.

You will probably see some initial excitement when you pick him, followed by a teenage tantrum or where he appears to ignore you. He will shun your hugs, play, and attention possibly as way of punishing you for leaving him in kennels.

Scientists agree too, with 2019 research suggesting that dogs have the cognitive and emotional capacity to hold a grudge.

An alternative reason for your dog ignoring you after boarding can be to do with stress. Boarding kennel stress afflicts many dogs in the short-term, with them being anxious due to their stay.

That can then manifest itself in many ways; for example, dogs can avoid eye contact when they are stressed. They can also sniff about the ground and act distant or distracted. It’s one of their ways of dealing with the emotion.

Handy Hint: I’ve written in detail about what to expect with dog boarding kennel stress and how you can take steps to deal with it or prevent it from being as bad.

2. My dog is clingy and needy after boarding

On the other hand, it’s not unusual to see the exact opposite dog behavior after a kennel, with your four-legged friend clinging to you.

You might find that want to sit on you (sometimes right into your face), follow you from room to room, walk in circles around you, and demand constant attention.

It means your dog loves and trusts you, needing the reassurance after the anxiety of a boarding kennel visit.

The bottom line is, often dogs will act different after boarding because they miss their owners so much.

3. My dog acts tired after boarding

There are a number of reasons why dogs are lethargic and want to sleep after boarding. It could be stress, physical and mental exhaustion, or sickness.

It all makes sense. Research says stress can make you tired. But it could be the opposite, and simply where your dog has had so much fun, he’s just exhausted and needs to recover.

Handy Hint: I’ve written a more extensive guide about why dogs sleep so much after staying in boarding kennels which explains the possibilities in more depth.

4. My dog is not eating after boarding

Again, this behavior after a kennel stay could be due to a number of reasons.

For example, a dog not eating after boarding could be sick and have no appetite, it could due to stress, or where they have had a change in diet and routine.

It’s quite possible that the lack of appetite is down to a bug. It’s easy for dogs to pick up minor bugs in kennels despite the vaccinations, so get him checked out by the vet.

5. My dog is eating and drinking excessively after boarding

And then there’s dogs who want to eat more than usual after a kennel stay. It’s because they will frequently eat less in kennels because they aren’t as comfortable in the new environment as they would be at home.

When they get back home, they will soon try to make up for it by eating as much as they can and gulping down drinks too. This behavior after kennels will probably pass within 24 hours, so let them eat as much as they want as they might have been starving themselves.

6. My dog has diarrhea and sickness after boarding

This is another common dog behavior after kennels, and like many of the others has varied causes. Your dog might be pooping about the house due to stress, excitement, a sudden intake of food and water, dietary changes, or after catching a bug.

Some dogs will even hold their urine in when in kennels if they don’t feel comfortable or at ease enough to let their guard down and go pee.

A bit of diarrhea in the first two days of your dog coming home from a boarding stay is almost to be expected. Having accidents around the house are certainly very common, and typically related to stress and excitement.

If it you are worried, phone your vet, but most cases will pass.

Handy Hint: Here’s how you can deal with diarrhea after a boarding stay, with some tips on how to possibly prevent it in the first place.

7. My dog is depressed after boarding

Another reason your dog is acting different after boarding could be due to depression. Some dogs like kennels, some dog hate boarding, with depressed behavior after a return home being quite common.

I polled dog owners on social media on the subject, and 39% said their dog was behaving differently after boarding with what appeared to be depressed behavior. You can see a graph of the results below.

8. My dog is shaking after boarding

Shaking is a sign of extreme anxiety, fear, and stress. It’s likely that your dog has experienced something traumatic whilst in the kennels.

It probably wasn’t an aggressive act from another dog, but is your dog being scared due to the sights, sounds, and smells of the boarding facility. Plus of course, the close proximity to other dogs.

9. My dog is aggressive after boarding

A small handful of dogs will act and behave differently after boarding with aggressive tendencies. A lot of the time this will be down to fear again.

It could be down to learned behavior too. This can develop is with boarding kennels that have free running areas for the dogs to play in. Just like you might find in a school playground, there will be bullies and a hierarchy.

Your dog might have picked up some bad habits in the playground and will bring those home. Just like a kid would do from school.

These are all scenarios of what happens when a dog comes home from boarding… or doesn’t happen! Many dogs love the experience and will almost treat the stay like we would a vacation.

If your dog is still acting differently after boarding once 24 hours has passed, this would be the moment I would contact a vet. I am a fan of the 24-hour rule to see what happens – you should do what feels right for you though!

You should also keep an eye out for other symptoms in addition to changes in behavior listed above, such as whining, barking, drooling, licking, pacing, panting, or trying to escape. Those would expediate me calling my vet for advice.

I blog extensively about dog boarding and how they can act or behave. In addition to the resource links in the guide above, you might also like the following articles.