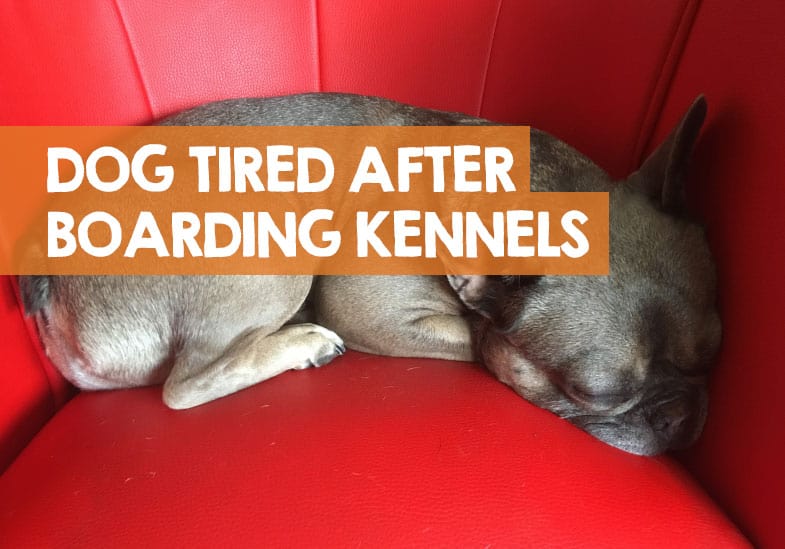 Making the decision to place your dog into boarding kennels is one that is often accompanied by feelings of guilt and worry. These concerns can be magnified when you pick your dog up, get him home, and notice changes in his behavior such increased sleep and lethargy. Tiredness is a particular concern as it could mean a lot of different things.

However, it is very common for dogs to sleep a lot after staying at boarding kennels and you’re not alone in noticing this. Many owners I’ve spoken with say exactly the same thing, but it is mainly being due to how busy kennels are for the dogs.

Hopefully your dog was in a reputable dog boarding facility where exercise, mental stimulation, and play was a big part of his stay. If that was the case, it’s easy to understand why dogs are so tired after being boarded.

But this won’t always be the case; it could be the sign of sickness or stress.

To try and figure why your dog is lethargic after a kennel stay, here are my tips and possible reasons for the tiredness and excessive sleeping.

Your dog could be sleeping a lot after boarding for any of the 5 reasons which I’ve listed below (or a combination of).

1. Your dog is physically exhausted

There are some people who say their dog probably views going to boarding kennels a bit like some crazy adventure vacation. I can identify with that, as in the best kennels your dog will have lots of play, toys, exercise, and other new dog friends to do it with.

Your dog could simply be sleeping more than usual because he needs the rest after all the physical activity he’s had whilst boarding.

2. Your dog is mentally exhausted

Your dog’s post-boarding kennel lethargy could also be a result of mental exhaustion. Studies suggest that mental fatigue causes perceived physical tiredness in humans, and I have no reason to believe it can’t be the same for dogs.

Dogs will have to put up with a change in their routine, new smells, sights, and sounds, all of which will contribute to mental tiredness.

It’s likely they have also had toys to play with and challenge them which might also have worn them down, with the need to recovery.

It’s not unusual for dogs to get sick after a stay in kennels, and this in turn can make them tired once they get home.

You can read more about what dogs can catch at kennels elsewhere on Doggysaurus.

4. Your dog is tired from stress

Not all dogs will enjoy their stay, and in fact, boarding kennel stress is also quite common. However, it does usually recede within 24 hours of getting home.

Stress is known to cause fatigue, insomnia, and can disrupt sleep. Your dog might not have slept to his usual patterns, so will need to catch up on sleep when you get him home.

Most of the stress will be due to a strange environment, other dogs in close proximity, and how much the dog misses the owner.

5. Your dog is punishing you

And lastly, your dog might just want to retire to their bed and sleep after boarding as a way of giving you the cold shoulder. Research was published in 2019 that suggested dogs have the cognitive and emotional capacity to hold a grudge.

This makes sense if they are going to sleep after boarding, as it could be your dog’s way of ignoring you for a while – to give you the message he isn’t happy about being abandoned!

When to call a vet about post-kennel lethargy

I am not a vet, but I am a concerned owner so if this were me, I would give it 24 hours. If my dog was still sleeping a lot after day and night, I would then give the vet a call.

Other things to look for would be if your dog is exhibiting any other symptoms in addition to the excess sleep and tiredness. For example, is your dog:

The above symptoms can be signs of stress and should disappear after a day of being back at home. Prolonged lethargy over a 24-hour period can also be a sign of sickness. It’s not unusual for dogs to pick up bugs at kennel facilities.

Another thing to look for and ask yourself is how your dog greeted you when you picked him up at the kennels.

Was he excited to see you, or was he lethargic when you picked him up?

If he ran up to you and was over-excited when you arrived, then came home and went straight to sleep, it’s could be simply a bit of short-term 24-hour exhaustion and stress.

Alternatively, if he was sleepy when you picked him up then it’s possible, he could be sick and you should take him to the vets as soon as you can to get checked out.

Your dog’s mind and body are going to be very busy when boarding, so it’s no wonder why dogs are so tired after staying in boarding kennels.

You could compare to how we humans feel after a long break away from home. I don’t know about you, but when I get back from a vacation, I need to day to chill out and recover before I get back to reality,

In most cases, dogs probably need this day of recovery too!

If you are concerned at all though, please do seek a professional veterinary opinion.

I regularly blog about dog’s and boarding, and you can read some of my more popular content below.