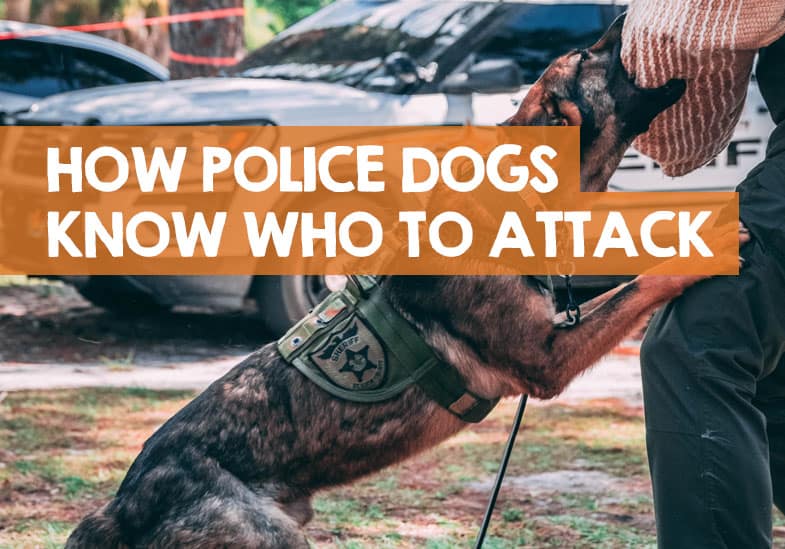 Watching K9 police dogs in action is something else, but have you ever wondered how they know who the bad guy is? What goes on in police dog training that means that can quickly single out the suspect in a crowd to chase, attack, and possibly even bite?

If you’ve ever wondered where police dogs come from, how they’re trained (and why their commands are usually in Dutch), and how they know who to attack then read on!

Let’s get into some more detail first though…

How do police dogs know who to chase and attack?

Police dog training takes a lot of time and hard work, and it continues daily even after a K9 team has been fully certified and deployed. Only then will the handler be confident that the police dog knows who to chase.

This type of specialized training needs to be refreshed before and after every workday and it continues until the K9 duo retires.

When it’s time to apprehend a suspect on the field, police dogs are fully under their handler’s control.

The dog knows to wait for the appropriate command before attacking the right person or showing aggression. He also knows that he needs to remain calm and submissive towards people the rest of the time.

The K9 handler is the one in control of the situation and is the one who decides if the police dog has to be unleashed. The handler makes sure that the dog is fully zoned in on the right person to chase, bite, and attack before the dog is released – it’s generally easy to tell who a dog is focusing on through body language.

Police dogs have trained with distractions all around and are thoroughly socialized with people of all ages. They know to go after a person attacking a police officer, and they know to stay away from bystanders that are just acting normally.

The K9 handler knows they have to be completely clear on who their dog needs to track and chase after before releasing and to make sure that the dog is completely focused on the suspect.

In an ideal situation, a fully focused police dog won’t veer off to bite someone else just because they happened to cross the street at the wrong moment. They are trained to go after the target to the exclusion of all else.

Unfortunately, not every situation is ideal, and sometimes police dogs do go after the wrong person.

Do police dogs ever attack the wrong person?

No matter how many hours are spent in training, a police dog is not a machine. He will make mistakes and occasionally chase and attack the wrong person.

Police dogs bite thousands of innocent civilians per year. And given their aggression and bite training, it very often gets ugly, leading to debilitating injuries, permanent scars, and even a few deaths.

Sadly, there is very little oversight of K9 units. There isn’t even a database in the United States to keep track of police dog use, so it’s up to local journalists to tally injuries on their own.

For example, from 2017 to 2019, USA Today reported that Los Angeles and Indianapolis reported over 200 bites by their K9 units, while Chicago only had one.

This is why police dogs are normally used as a last resort when it comes to apprehending suspects. Their commanding presence next to their K9 partner is usually enough to intimidate the offending party and make them cooperate peacefully.

In these situations, there’s no need to let go of the police dog’s leash at all.

Can my dog be a police dog?

Only certain types of people become law enforcement officers, and only certain breeds of dogs can become police dogs. With intimidation and aggression as their most dominant trait of a K9 companion, a small poodle can’t really qualify.

Most police dogs are specifically bred to work in law enforcement. German Shepherds and Belgian Malinois are the most popular breeds because they are intelligent, cooperative with handlers, and are tenacious when it comes to chasing and apprehension.

These breeds grow up big and strong, adding to the intimidation factor if they’re assigned to be a patrol dog. They are usually kept unneutered too, to maintain their natural aggression.

How are police dogs trained?

Police dog training is highly specialized. It’s done as partners – a police dog and his handler make up a K9 unit that will stay together for as long as possible.

An efficient trainer is needed for a receptive and obedient dog, so handlers go through 2 years of training before they’re allowed to apply for a partner.

Police dog candidates are usually acquired when they’re about a year old and they go through 4 to 6 months of rigorous, full-time training. After deployment, K-9 units still go through training exercises daily to make sure they’re in tip-top shape.

The first step in police dog training is basic obedience. This is where every dog’s natural ability is evaluated, to see what his natural skills and tendencies are.

Basic commands include ‘sit’, ‘stay’, ‘come’, and ‘heel’. Training is done in isolation with his handler as well as with distractions. The dog needs to be able to follow all commands even in a noisy environment with unfamiliar people.

This phase of training unfolds over a year or more, slowly and surely cementing the bond between partners and building a solid foundation before a police dog candidate can move on to developing more specific skills.

Police dogs have to be stronger and more agile than any other dog. They jump over walls, run up and down stairs, and encounter countless obstacles while on duty.

First, they are taught to chase a target when prompted. Then, they are taught to bite on command and hold an agitator hostage. This specialized training calls back to basic obedience – a police dog should always remember to respond to a command to stop. They are also trained to bite as hard as they can – police dog bites can chomp right through sheet metal.

Many police dogs receive basic obedience training in highly specialized schools in Europe before they are sold to police departments across the world. The commands they learn are commonly Dutch or German, and the handlers and trainers adjust accordingly.

3. Detection and search and rescue

Dogs have 225 million scent receptors (humans only have 5 million) and some police dogs go through training to detect drugs, explosives, accelerants, and other potential evidence in crime scenes. Military dogs can detect landmines.

Dogs learn how to sniff out these illegal objects not because they like the smell but because they’re trained to associate them with toys and positive reinforcement.

Training begins with a simple game of tug-of-war using a white towel. Next, a bag of contraband is rolled inside the towel and the game continues until the dog relates the smell to his favorite plaything.

Then the towel with the drugs folded inside is hidden in various places – the dog then continues the game of sniffing out his favorite toy.

Search and rescue dogs are trained similarly. The “find it” command is a game for them – they associate human scent with rewards and games. This is how they know to search through forests, avalanches, and rubble to find those who are lost.

Most of the time, police dogs know who to attack and won’t fail in their mission of track and chase… but it can go wrong sometimes as we’ve seen.

However, put your faith in them, because the training police dogs go through, means that will mainly know who the right person to chase and bite is… particularly if that person starts to run away!