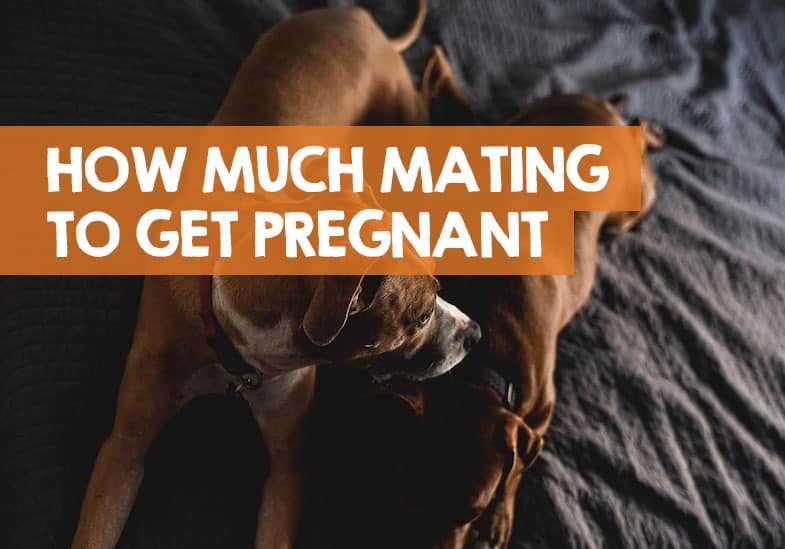 Like most people new to dog breeding, ever wondered how many times a female dog should mate to get pregnant?

So, how many times should a dog mate to get pregnant? Research shows that female dogs in heat have a higher chance of getting pregnant if they mate twice or thrice during the estrus phase. Most breeders opt for three mating sessions. However, it’s possible for a dog to get pregnant after just one mating session.

Curious to know how often a female dog in heat will allow a male dog to mount her? Or how to tell if the mating was a success? Stick around for answers to these and more.

Dogs mating explained: Here’s how many times a female dog must mate to get pregnant

Dogs have a mating season — popularly known as the heat season. All dogs that haven’t been spayed for breeding’s sake get heat cycles for a lifetime. For most dogs, their cycles happen twice every year.

The heat season is an important period for breeders, as this is the only time their female dogs can get pregnant and continue the bloodline. Responsible breeders often wait until a female dog is more mature before letting them mate and get pregnant.

While most female dogs enter for the first time when they turn six months old, this isn’t the right time to breed them.

One, because they are still too young to take on motherhood responsibilities. And two, there are so many health risks involved if a dog gets pregnant at such a young age.

A bitch must have experienced two heat cycles before being bred. That means your female dog should have hit at least 18 months old before you can start thinking about mating them.

Research shows that a female dog in heat has a better chance of getting pregnant if they have two or three mating sessions — although most experienced breeders prefer to mate their female dogs three times.

Also, many breeders space out these mating sessions (like 24 hours apart) to allow the dog to rest before going for the next round of mating.

A female dog (and her mating partner) might have passed all the pre-breeding health checks, but fail to conceive after mating only once. For this reason, most breeders stick to three mating sessions to avoid disappointments.

At what stage of the heat cycle can a female dog get pregnant?

The first stage is called proestrus, known to last around nine days. During this phase, a female dog experiences the typical heat signs — vaginal bleeding, swollen vulva, and licking of genitals, among others.

Contrary to what people think, a dog can’t get pregnant during proestrus.

Sure, the heat signs are there. But there’s one major thing missing — mature eggs ready to be fertilized.  In other words, the eggs haven’t yet been released by the ovary and thus haven’t traveled to the site of fertilization (oviduct).

So if the female dog mates during proestrus, she can’t get pregnant because the male dog’s sperm won’t find any eggs in the oviduct that need to be fertilized. There can’t be a pregnancy if the eggs aren’t fertilized.

Once proestrus ends, the dog enters the estrus phase, where everything goes down.

During estrus, the ovaries release the mature eggs, which then travel to the fertilization site, waiting for the sperm to do their thing.

Vaginal bleeding lessens or stops completely during estrus. Instead, the female dog will have a clear, watery vaginal discharge (not the usual bloody red discharge present during estrus).

Many first-time dog parents with unsprayed female dogs assume that once the bleeding stops, their dog’s heat cycle is over — that she can now move around the hood without getting pregnant.

That’s not true because estrus is a female dog’s most fertile phase.

Experts say that most female dogs are mated between the 10th and 14th day after the start of proestrus. However, some dogs don’t show noticeable signs of heat, so it may be hard for the breeder to tell when she’s entered estrus.

In such cases, the dog will have to undergo a vaginal smear or progesterone test so the vet can predict when she will be most fertile for mating.

Is a copulatory tie necessary for successful mating?

Ever seen dogs standing rear-to-rear for several minutes like they’re stuck together?

What you witnessed was a copulatory tie, the preferred mating tactic by most breeders.  It’s said that, unlike a normal dog “quickie,” a tie ensures that the stud has enough time to fully ejaculate into the female dog’s vagina without semen leaking out.

That way, there’s a higher chance of the sperm reaching the eggs and fertilizing them.

While there’s no doubt that a copulatory tie has better mating outcomes, a dog can still get pregnant without a tie (as long as the stud has ejaculated fully, even if it was a seconds-long mating session).

You will know the mating was a success if your dog starts showing early signs of pregnancy days after they did the deed. You will notice symptoms such as:

If your dog still doesn’t get pregnant despite multiple mating sessions, your vet will likely suggest running more tests (both on your dog and the stud) to help solve the mystery.

Tests aside, you’ll be surprised to know that something as simple as stress may make it hard for a male dog to ejaculate when inside the bitch’s vagina.

How many times will a female dog let a male dog mount her?

If not supervised, a female dog in estrus can allow any male to mount her as often as she likes. Let’s just say that she is the one who calls the shots.

Some dogs can accept being mounted almost daily during estrus (which lasts nine days on average). Others only for a few days. If your female dog hasn’t been spayed and you don’t want any pregnancy surprises, you should keep a close eye on her.

It’s worth noting that while a bitch in heat may have strong sexual urges, they may refuse to be mounted. It’s common for some female dogs in heat to react aggressively toward a male dog trying to mount on her.

Some act this way because they find the stud undesirable.

For instance, if a bitch in heat has a small body, they may reject a stud who’s bigger. Also, if a dog has had traumatic experiences during other past heat cycles, she might refuse to be mounted by any male.

Artificial insemination is often a great alternative for female dogs in heat that completely refuse to be mounted.

Do dogs get pregnant every time they mate?

The short answer is, not really. While some dogs can get pregnant if they mate only once, one mating session doesn’t always guarantee a pregnancy.

How many times should a female dog be mated?

Experts say that a female dog should be mated two or three times to increase her chances of getting pregnant.

How do you know if dog mating is successful?

As mentioned earlier, you can know that mating was a success if your dog shows signs of pregnancy days after mating.

How many days will a female dog let a male mount her?

As discussed earlier, it can be many times or less, depending on whether a female dog is interested in being mounted or not.