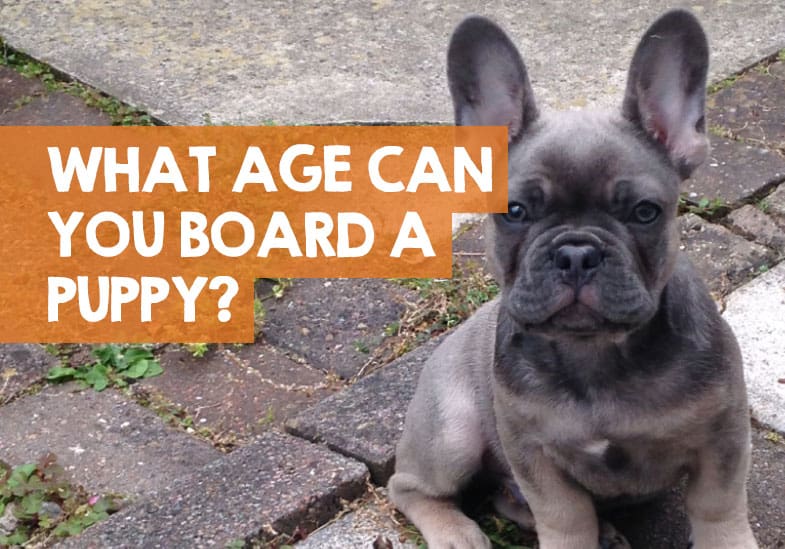 In an ideal world you wouldn’t have to board a young puppy, but unfortunately life can get in the way and you’re left with no choice. We had to do this when Claude was a puppy due to a family bereavement, putting him into a boarding kennel for 7 days.

Here’s my personal opinion followed my reasons, and then some examples of what professional boarding kennel facilities will tell you.

What age can you board a puppy? Most boarding kennels won’t accept puppies aged younger than 4 months after they have had vaccinations. However, 6 months of age is preferable as the puppy will have matured more at this point.

If someone was to ask me what age puppies can go into boarding kennels, I would always say 6 months old, and even then, there are some caveats on how early you can board puppies.

All boarding facilities are different, and all puppies are different. Read on to find out why I believe 6 months is the lowest age you should put a puppy in kennels, and how you can make a decision that’s hopefully the right one.

Can you board a 6-month-old puppy?

You can put a puppy in kennels once they reach 6 months of age (24 weeks), providing they know how to behave, have been socialized with other dogs, are toilet trained, and have stopped their biting and teething behavior.

At this age, they will hopefully have a little more independence. But if your puppy suffers with separation anxiety, I would not place them in boarding kennels even at 6 months of age, it still could be too soon – the alternative would be a pet sitter who can give them constant attention and reassurance.

In my view, puppies younger than that age will struggle in boarding kennels and are more likely to suffer with boarding kennel stress and come back home afterwards behaving differently.

Is it ok to board a 4-month-old puppy?

Theoretically you can board a 4 month old puppy this young, as most will have had their first and second round of vaccination injections. Most puppies will have their first injections as late as 10 weeks of age, with the second round two to four weeks later. That means puppy of 3 and a half months old should be fully vaccinated and ready to socialize with other dogs.

The reason this is so important is because boarding kennels will not allow any dog to stay until they have been vaccinated fully. If they aren’t, they not only run the risk of getting ill, or can pass on sickness and disease to other dogs.

According to the PDSA, the illnesses that vaccinations typically cover include parvovirus, canine distemper, leptospirosis, and infectious canine hepatitis.

However, even if your dog is fully vaccinated at this age, they can still pick up bugs, fleas, and ticks in boarding kennels, or even kennel cough. Their immune systems are weaker when this young, meaning it’s not an age a puppy should be boarded (in my opinion).

Handy Hint: Here’s a list of all the things that dogs can catch when they stay in kennels, despite having had their vaccinations.

Can you board a 12-week-old puppy?

You will find some boarding kennels that will be happy to board a 12-week-old puppy. All boarding kennels require visiting dogs to be fully vaccinated. If your puppy had his first and second injections early in life, then 12 weeks, or 3 months, is the absolute minimum age you can board a puppy.

Would I board a puppy as young as 3 months old?

Personally, no. I remember how dependent my own dog was on me and my wife at that age. I often compare having a puppy that young as having to look after a baby or toddler.

Dogs are still learning their way in life, look on their owners as substitute parents. In fact, a piece of research I read stated that:

“Dogs and children seem to share what is known as the secure base effect. This effect is seen in parent-child bonding as well as the bond between humans and dogs. This refers to the idea that when human infants interact with the environment, they use their caregivers as a secure base.”

Given what we know, and how dogs probably look on us as their parents, can you imagine leaving a baby in a nursery for 7 days whilst you went away?

Of course not, so I think we need to consider puppies as young as 12 weeks of age in a similar way to how we do babies. In fact, there’s evidence to suggest that dogs miss their owners when placed in kennels, and puppies even more so.

Staying in kennels could potentially have an effect on a young puppy which could take a while to resolve once you return from vacation.

Handy Hint: I’ve wrote an article earlier this year which explains why I think dogs think of us as their parentswhich is another reason not to board a puppy too young.

Reasons to not put puppies in boarding kennels too young

To recap on what I’ve already explained, here’s a checklist of reasons why you should not put a puppy in kennels until they are at least 6 months old.

Even then, based on the personality and character of your dog, boarding could be bad for your puppy and it could be too young even when older than 6 months.

Why boarding kennels can be bad for young puppies

When you start to check out local boarding facilities you will notice they will probably have different policies on what age puppies can board with them. Reasons to walk away would be if;

Either of those points would be red flags to me… and ideally, I would be looking for 6 months the youngest age they are willing to accept puppies into their care.

Other things to look for to make sure you are making the right decision about boarding your puppy with a kennel are:

Whilst putting this guide together on how soon you can board a puppy, I found a number of specific questions people were asking on dog owner forums. They were frequent enough for me to want to answer them explicitly.

Can you board a 9-week-old puppy?

You cannot send a 9-week-old puppy to boarding kennels. They will only have been away from their own mother for a week, and in their new home for a matter of days. To uproot them into a kennels this small with other dogs, sights, sounds, and smells it cruel and unnecessary.

They will also not have been vaccinated yet, as the youngest age puppies have their first injections is 8 weeks, with the second round 2 weeks later.

To put a 9-week-old puppy is very irresponsible as they will be at high risk of illness including fatal diseases such as parvo.

Can you board a 10-week-old puppy?

You should not board a puppy at 10 weeks of age. It is unlikely that they will have had all of their final vaccinations, won’t be socially adjusted to other dogs, will have a weak immune system, and are likely to suffer with anxiety if placed into a boarding kennel environment.

How early can you board puppies then?

I refer back to my initial advice where some boarding kennels will accept 12-week-old puppies, with most facilities starting boarding from 4 months of age.

What’s the alternative then?

If you simply cannot get away with having to get your puppy looked after at an age younger than 4 or 6 months of age, I would recommend a dog sitter who can come and stay in your house.

The benefits to this are:

Boarding kennels have minimum age policies to protect your puppy. When they are young, then are more prone to contracting airborne viruses, which they can catch even without face to face contact with other dogs.

The bottom line is that if you are getting a puppy it’s a huge responsibility. If you are planning on going away in the first 3 to 4 months of owning them, please do think again.

If you want to best prepare your puppy for their first ever boarding stay, here are some essential guides you need to read.