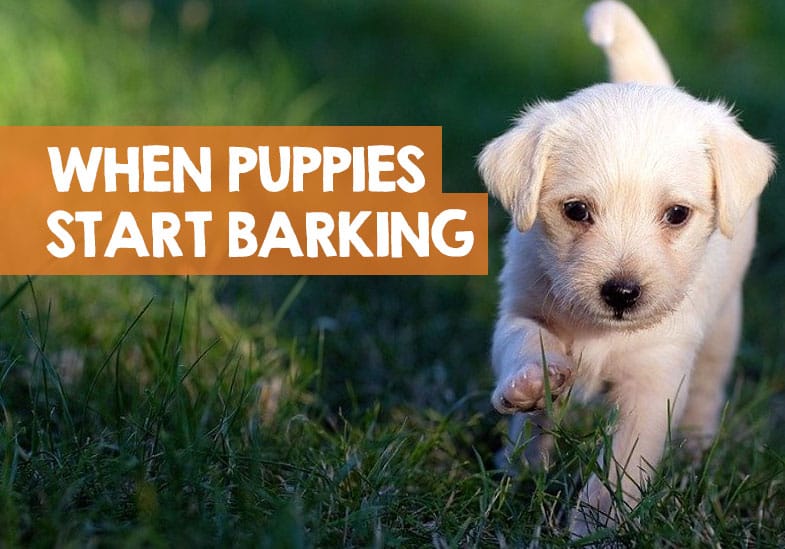 When you first adopt a puppy, you will notice them making all sorts of funny little noises. Other puppies can be extremely quiet and will never learn to bark much at all. But as an overall generalization, there is a timeframe when puppies start barking, laid out below.

When do puppies start barking? Puppies can start to bark between the ages of 7 to 16 weeks old. Before this point, they can make little grunts and whines 2 to 3 weeks after being born. Some puppies won’t bark much at all as they grow older.

Here’s more detail on what to expect from your puppy’s voice, and some related information further down the page – including when puppies can start to bark at strangers.

When will my puppy start barking?

You might be wondering when your puppy will start to vocalize and bark. Well, for the first few weeks of life, most puppies will be relatively silent, and you may not hear any noises from them at all.

Put simply, canine communication is far more complicated than you might first think. And because of this, there is no straightforward answer to when your puppy will start barking as soon as they are capable of doing so – because they might not do.

It’s not uncommon for some puppies to not bark at all; unless they learn to do so from another dog. In fact, many owners can go months without hearing their pups bark.

As a real-life example, my dog Claude rarely barks. I can probably count on one hand how many times I’ve heard him bark since we got him as an 8 week old puppy.

There are also other factors that come into play like the dog’s personality and temperament. Both can play a big role in whether a puppy is silent or barks.

Despite this, most puppies will eventually learn to bark, be it from another dog, or through discovering it themselves.

However, a lot of puppies will learn to bark pretty early on in their lives (to the dismay of a lot of owners). At first, young puppies will begin to vocalize through whining or other small sounds, usually to signal displeasure or to alert their mother to something: often their need for milk.

Nevertheless, it is important to realize that this will only happen once their eyes have opened, and for the first few weeks of their lives, they will be virtually silent.

Normally, once 8 weeks have passed, puppies will become more experienced with vocalizing, and they may begin to start barking, sometimes as early as 6 weeks. These barks will not carry the same strength as an adult dog’s bark and will be much shriller and higher in comparison.

When does a puppy’s bark get deeper?

In fact, most puppies’ first barks will sound more like yelps than anything. This is true even for large breeds such as German Shepherds, Mastiffs, or Labradors.

Handy Hint: There are both ethical and legal reasons for why you can’t sell puppies until they reach a certain age, read more here.

How do you stop a puppy from barking all the time?

Due to this, an older puppy’s habit of barking can quickly become bothersome for both owners and neighbors alike, especially when they are left alone for long periods. You might not want your puppy to start barking at strangers or the door all the time.

Particularly boisterous puppies can bark all day long, whilst nervous puppies may bark at any unexpected noises when left by themselves.

Separation anxiety can also be another reason why a puppy might bark, and this often goes hand in hand with other negative behaviors such as property destruction (like peeing on furniture).

Although this may not be a worry for owners who live in a quiet neighborhood, it can be a pain for owners who live in cities or busy residential areas. It is a fact that puppies will eventually grow into adult dogs, and unless it is addressed, habitual barking can become an even bigger problem as they get older.

If like me, you live next door to a dog who barks constantly, you will be aware of how annoying and frustrating this can be. Thankfully, there are several things we can do to limit this sort of behavior in our pups.

Firstly, it is a good idea to try and figure out what is triggering the barking in your puppy. As mentioned before, this can be caused by several different things, ranging from separation anxiety to the personality of your pooch.

If you own a particularly adventurous puppy they may bark out of boredom or pent up energy, for example. Likewise, a nervous puppy may bark out of fear of unknown noises, or at things going on outside the house – like strangers walking past.

Helping an adventurous puppy to stop barking can sometimes be as simple as spending a little more time playing with them or taking them out for extra or longer walks (here’s when they will start walking). Once they are tired, most puppies will calm down and become a lot less vocal than usual.

Additionally, the same is true for nervous puppies who will often drop off to sleep after rigorous exercise. Comforting your pup when they are scared can also help, and this goes a long way in helping to calm them down.

However, you must make sure to give them space from time to time, as too much attention can lead to anxiety.

You can also train your puppy to sit using treats, rewarding them when they do as you command, instead of barking.

Additionally, you can use this method to teach them to go to their bed when it is in a different area of the house, removing them from whatever situation is causing them to bark (such as a cat outside, or the postman knocking on the door).

With time, your puppy should begin to bark less, and with some reinforcement, this method will begin to have a positive effect on them, especially when they are left alone.

Handy Hint: Puppies will survive if taken from their mother at 6 weeks, but they could suffer with developmental problems.

Why do puppies bark?

Now that we have explained several ways in which you can help your puppies barking not to get out of control, we can talk about the reasons why they bark, and what other meanings these vocalizations have.

However, it is worth mentioning that barking is completely normal behavior for puppies and should only be discouraged if it is directed in the wrong way.

Puppies will develop a lack of trust in their owners if they are scolded too often, and this may well lead to increased feelings of anxiety and fear.

The main reason you should not entirely discourage a puppy from barking is that it is a vital form of communication for them.

Together with body language, puppies will often use their barking to communicate a number of different things to other dogs – as well as to you, their owner.

Handy Hint: Did you know you can roughly tell how old a puppy is by their teeth?

When do puppies start barking at strangers?

Puppies can start barking at strangers from the moment they find their louder voice and want to alert you to things, so it could start as young as 8 weeks old.

For example, alert barking is one of the many ways in which puppies use their bark to communicate. Most of you will have experienced this firsthand, as it is often a puppy’s primary method of alerting you to the presence of a stranger outside the home, or at the door.

Unfortunately, this form of barking is the most likely one to cause issues, as some pooches will bark continuously instead of just a few times.

Likewise, alert barking can be triggered by other everyday things, such as the postman knocking, or the local cat passing through the garden.

However, when trained correctly, alert barking can be a very useful tool in keeping you and your family safe.

Puppies will also bark for other reasons, such as an invitation to play. This takes the form of a high-pitched bark repeated several times and will be coupled alongside friendly body language: like tail wagging, tongue lolling, and the classic “butt up in the air” pose.

Likewise, dogs can use their barks to indicate excitement, such as when their owner comes home from work, or when they come into contact with other dogs.

Additionally, barking is often used as a form of greeting. Many dogs will do this when they spot another dog they are familiar with, even if they are across the street from them at the time.

This can come off as aggressive to some owners, however, it is usually just a dog’s way of saying hello, or alerting other dogs to their presence.

Handy Hint: It might seem like your puppy is sleeping more than usual, but it’s perfectly normal for puppies to sleep all the time.

Why do puppies bark in their sleep?

You might also have noticed your puppy barking in its sleep. This is nothing you should worry about and is completely normal behavior. It can be tempting to wake them when they do this, but just like us, dogs have dreams, and these are often accompanied by movements and noises.

For example, alongside barking, puppies might whine, yelp, or growl when they are sleeping. Additionally, their ears might twitch, they may shake, or their legs might mimic running.

However, puppies of both breeds will dream a lot more than their adult counterparts, as will older dogs.

Barking happens when a canine is deep into its REM cycle, a phase of sleep unique to humans and other mammals (as well as birds).

Characterized by rapid and random eye movements, REM sleep is directly responsible for a puppy’s dreams.

However, unlike humans, puppies enter REM sleep more often, and this causes them to dream more regularly compared to us humans.

Handy Hint: At around 6 months of age it will be time to change how frequently your puppy eats each day.

The bottom line is, most puppies will start to bark around 8 weeks of age. Some can go on to become big barkers, barking at strangers at the door constantly – or any other trigger.

Some puppies won’t start barking at all.

My dog is now 4 years old, and I’ve only ever heard him bark about five times in his life.

Here are some more articles about how puppies develop and what you can expect from them.