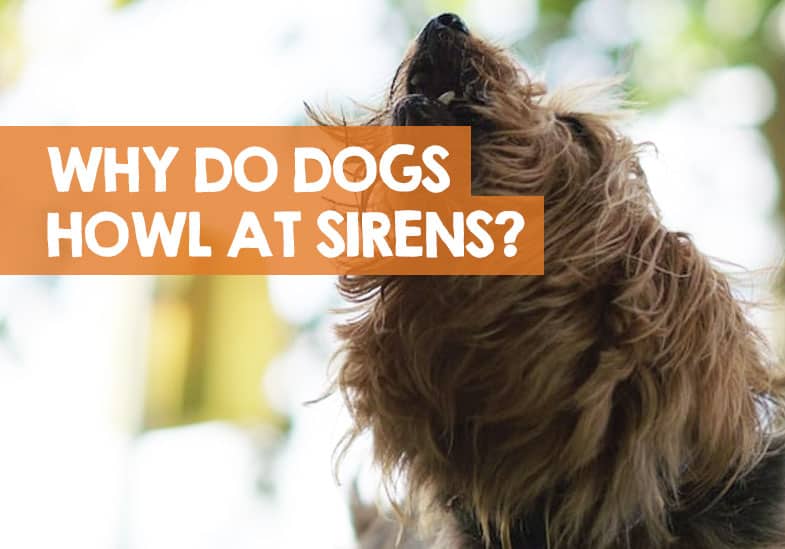 Certain sounds can trigger dogs to howl. It could be music, TV, a knock at the door, or you returning home from work. But one trigger that seems to unite many dogs in howling is the sound of sirens, for example from a fire truck or police car.

But just what is it about this sound, and why do dogs howl at sirens?

The most likely reason that dogs howl at sirens is due to an ancestral trait from wolves where they think the sirens are other dogs howling in the distance to communicate with them. It could also be an inherited behavior and a dog’s attempt to alert its owner of the siren assumed danger.

Or perhaps your dog is scared of the sound of sirens, so howls, cries, and whines to show his fear and displeasure.

But it might not be any of this, and your dog could howl at police sirens for entirely different reasons. So, with that in mind, I wanted to explore this further including whether it’s true that sirens hurt their ears, why some dogs don’t howl at fire sirens, and a lot more!

Dogs & Sirens: Reasons why dogs howl when they hear sirens

Nothing sounds worse than the long wail of a siren on a peaceful evening.

Most of us hate the sound of sirens. And for the short time that an emergency police or fire vehicle speeds nearby, the last thing you’d want to hear is another cringe-worthy noise. Like a dog howling loudly, as though competing with the siren.

If your dog often does the most when they hear a siren, the first thing that probably comes to your mind (besides grabbing your earplugs) is why your dog howls at sirens.

Contrary to what many think, dogs don’t howl because they find sirens frustrating.

If you thought your dog’s howling is their way of protesting the sudden noise disturbance from the sirens, that’s not it.

Experts have studied this common dog behavior and come up with fascinating reasons behind a dog’s siren-triggered howling.

Let’s take a closer look at these reasons:

1. Dogs howl at sirens due to inherited mentality

Your dog’s ancestry is to blame for almost every strange behavior they exhibit, including howling at sirens.

As you’re probably aware, dogs trace their lineage back to wolves. So, it’s common for them to display behaviors like that of their ancestors.

Since any high-pitched noises in the wild provoked howling in wolves, most dogs today feel the need to howl when they hear piercingly loud sounds like fire and police sirens.

Your dog may howl, cry, or whine when a siren goes off purely out of instinct. The siren’s high pitch simply triggers the urge to howl.

2. Dogs howl at sirens to communicate

Wolves relied on howling to keep in touch with other wolves. If a pack split up, say, for food hunting purposes, then they would howl at their respective locations to ensure they reunite successfully once the hunting is complete.

Dogs howl they want to communicate with one another, just like their wolf ancestors did. They also do this to you to communicate, for example when you get home from work.

Dogs don’t understand that fire and police sirens are simply man-made sounds. To them, any high-pitched noise like a siren is a howl from another dog.

So, when there’s a fire truck speeding near your home, your dog will think it’s another dog trying to reach out to them. And like the excellent communicator they are, they won’t want to snub their imaginary friend, aka “Mr. Siren.”

Your dog has the best intentions howling at a siren – only that they don’t know how much they annoy you  when they do so.

You’ll also realize that other dogs within the neighborhood join in the howling as soon as your dog begins to howl at the siren. They will all howl to communicate their respective location in solidarity with the “dog” (siren) that started it all.

And as the siren fades away, the dogs will assume that the “loner dog” (siren) dog has found his pack, and they don’t need to continue exchanging location details.

Your dog will also stop howling, oblivious that they almost made you deaf a few seconds ago.

3. Dogs howl at sirens to warn of a threat

Most dogs feel the need to raise the alarm when they hear a loud noise, even if the said sound doesn’t pose any threat — like, in this case, sirens.

Our furry pals are often praised for their hearing prowess (here’s how to test it at home), which researchers say is nearly four times better than ours. This means your dog can hear a siren from miles away and start howling before you hear the sound yourself.

You’re likely to hear them howl a few minutes before the ambulance passes your home and continue until the siren ceases.

Funny enough, your dog will think that the howling at a siren is what has chased away the “threat.” You cannot convince them they haven’t done you and your neighbors a favor!

Your furry friend likely howls at sirens every time because they believe that if they don’t, the “threat” won’t disappear.

4. Dogs howl at sirens out of fear

Some dogs fear sirens, probably because they’re yet to understand that the loud noise won’t cause any harm.

Howling is one way our dogs vocalize their fears. If your dog normally freaks out when there’s a siren, they might howl and display fear-like signs such as drooling, pacing around the house, hiding, etc.

You can help overcome their fear of sirens through training.

For instance, consider playing recorded siren sounds regularly (starting with low-volume sirens first, then moving to high-volume sounds) and offering them a yummy treat or praises if they keep quiet.

Positive reinforcement will eventually make your dog know that remaining calm when there’s a siren can earn them good things.

This training also works if you want to stop your dog’s annoying siren-triggered howling.

Giving commands like “quiet” and rewarding them with a treat or praises when they obey will help them understand that howling at sirens can make them miss out on the good stuff!

Whenever a siren goes off, our ears suffer the most. It makes sense why most dog parents assume that dogs experience discomfort when they hear a siren.

Truth is that a mere siren can’t cause any pain to your dog’s ears. If sirens did affect dogs’ ears, there’d be concrete proof to back this, but there’s none.

You’d also probably notice your dog seems under the weather a few hours or days after the siren. But this never happens.

Why some dogs don’t howl at sirens

While most dog owners have to endure the infuriating siren sounds and their dog’s endless howls, some can’t relate to this.

If your dog is among those that remain unbothered when there’s a siren nearby, don’t fret. It’s normal for some dogs not to howl when a siren goes off.

There are a few reasons for this:

FAQs on why dogs howl at police sirens

Why does my dog howl when he hears a siren?

As discussed earlier, your dog may be howling because their wolf-inherited instinct tells them to. It’s also probably because they think the siren is another dog’s howl or because they fear the siren sound.

No, that’s not correct. There’s no evidence showing sirens affect a dog’s ears.

Are dogs sad when they howl?

The short answer is, not always. Dogs also howl when they are happy or fearful.

Why do dogs howl at certain sounds?

Dogs like to howl high-pitched sounds like sirens or alarms because these sounds remind them of the howling noises that other dogs make when communicating.

As if the siren from a fire truck or police car isn’t annoying enough, many dog parents often find themselves with an additional source of noise pollution: a furry companion that passionately howls at the siren. If you can relate to these thoughts and wonder why your dog howls at sirens every time, we have the answers for you.