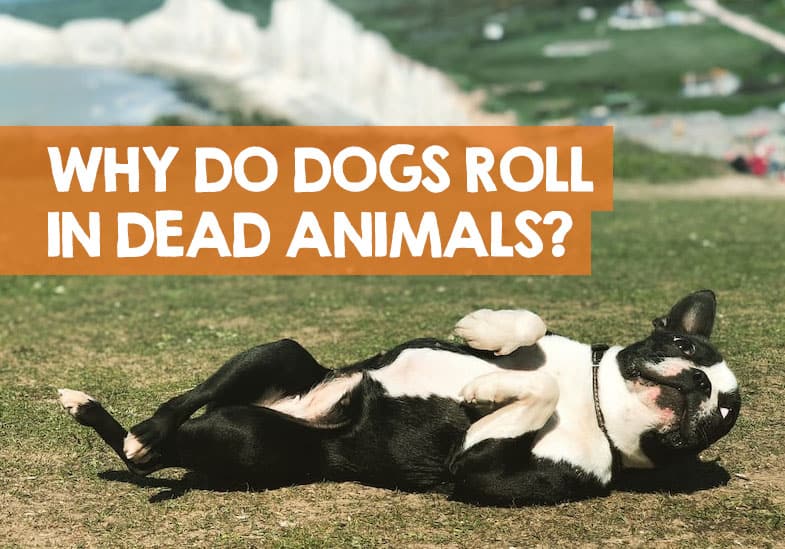 Whether rotten food, fresh animal poop, or decaying carcasses, most of us can’t stand the sight of nauseating things. But a dog will gladly paw at a dead animal, then roll in it without a care in the world. But just why do dogs roll in dead animals and stinky stuff?

Dogs roll in dead animals for several reasons including it being an inherited hunting trick (more on that in a moment), a way to win other dogs’ attention and mark territory, they enjoy it, to name a few. But as you’ll soon see, this behavior can put your dog’s health at risk.

Keep reading as I get into details of why dogs roll in stinky stuff and dead animal carcasses like it’s the best thing ever. What’s more, I’ve put together a few tips to help you stop this disgusting habit.

6 reasons why dogs like to roll in dead animal carcasses

Your canine pal has just had a nice bath and probably smells like fresh roses. You’ve decided to take him for an evening walk in the woods, the perfect opportunity for them to air-dry since they hate getting blow-dried after bathing.

Everything seems okay. You’re enjoying the breathtaking view of nature. And there’s your strolling buddy right ahead of you, busy sniffing around.

Then the unthinkable happens. Your dog drops and starts rolling in the rotting rabbit carcass he’s discovered. Yuck!

We know our canine pals belong to the Canis Familiaris species. But because of their disgusting rolling-in-carrion behavior, let’s just leave it at Canis Yuckus. If you get what I mean.

Of all the amazing things your dog can do, you may wonder why they’d choose to partake in one of the grossest behaviors ever known to man.

Experts have studied this strange yet common dog behavior and come up with possible explanations as to why it happens.

If you’ve been trying to wrap your head around why dogs often roll in animal carcasses, these six reasons will satisfy your curious mind:

1. It’s a hunting trick inherited from their distant relatives, wolves

Our dogs have wolf ancestry. And even though the domestication of dogs began several thousands of years ago, they still have wolf-like tendencies within them.

Your dog rolls in dead animals because this behavior is rooted in their wolf-like DNA.

When hunting, it’s common for wolves to roll on dead animals to disguise their natural scent as they pursue prey.

Dogs love going after prey. And they probably know that if they smell dog-ish, their target prey will know their attacker is nearby.

So, what will a dog do instead? Roll on any dead stuff they come across to rub that nasty scent all over their bodies.

Your dog likely thinks it’s easier to sneak up on prey like squirrels and raccoons if they don’t have their typical dog smell.

Did You Know? There are several dog breeds that could be capable of killing a wolf.

2. Anything for the park

As you may know by now, dogs are social creatures. They love hanging out in groups and will take a bullet for the pack.

Only that the “bullet” here means soaking in stinky carrion on behalf of the other dogs.

When a dog has this pungent carcass smell on their body, they’ll return to their dog squad and “submit” the smell for review. This strong smell lets the other dogs know what “delicacies” await them out there. And that’s how the other pack members will kick start their hunting mission.

Also, dogs in a pack may choose to roll in the same dead animal carcasses so they can all have a similar scent that gives the pack an identity.

3. They crave admiration and want to impress

Sometimes, a dog will want to be the center of attention. And he will do anything to get noticed by their canine mates, including the dog rolling in animal carcasses.

Your dog probably knows that being covered in this horrible scent will make him stand out among his canine mates. They walk up to him and start sniffing his body. They’ll instantly admire his predatory skills, thinking he got all that filthy smell from wrestling a prey.

Dogs have the weirdest scent preferences. They hate the smell of fragrances on their body but love self-perfuming themselves with the odor of rotting animals.

So, if you find your four-legged busy romping in a carcass, they may be trying to remove the smell of the scented dog shampoo you used during bath time.

5. They are claiming territory

Dogs are pros when it comes to territory marking. They do it all the time when on heat by urinating almost everywhere. And they will do it when they find dead prey.

Your dog may decide to roll on that squirrel’s body simply because he wants to leave his natural signature all over the squirrel’s carcass. That way, other dogs nearby know that the carcass belongs to him.

We know that our canine pals can be quite playful. But sometimes, they may decide to take things too far.

Dogs also like to roll in dead animals and carcasses to spread it everywhere. They love this. Maybe at that moment, no activity comes close to the joy of twisting and turning on a dead animal.

Handy Hint: Here’s what you need to know about dogs catching rabies from licking dead animals and blood.

Why rolling in carcasses is dangerous for your dog’s health

You should be worried when you see your dog on top of a dead animal, no matter how small it is. If the animal died of a deadly contagious disease, your dog risks getting infected because of the physical contact.

Also, dead animals have loads of parasites. All the ticks, fleas, and mites in the carcass will be glad to find a new body to terrorize.

So while your dog is having a good time rolling on carrion, these parasites will attach themselves to his body. That may mark the beginning of your furry pal’s health going south.

How to stop your dog from rolling on dead animals

While lying on dead carcasses is a natural habit in dogs, you can do something to prevent this from happening under your watch.

No one wants a stinking dog in the house. And let’s not forget there’s a possibility of them transferring all that filth to your future and beddings.

Why do dogs roll in smelly things?

Dogs simply love disgusting smells so will roll on mud and stinky stuff when they can. They inherited this gross rolling behavior from wolves.

Why do dogs roll in dead animals and poop?

Dogs roll in dead animals and poop for several reasons, including for fun, to mark territory or hide their natural scent when hunting, and to impress other dogs with their strange smell.

Why do dogs roll in dead bugs?

Dogs enjoy rolling in dead stuff like bugs for different reasons. For instance, the dead bug smell will make them popular among other dogs, it’s enjoyable, and they want to mark the area where the dead bugs are as their territory.

Why do dogs roll in dead worms?

As mentioned before, dogs like to roll in dead stuff like worms since they love having a pungent smell on their body. They also find the rolling act fun or are trying to remove the smell of any scented fragrance on their body, among other reasons.

Try as you might, it’s actually quite hard to stop a dog rolling on dead animals. It’s part of their DNA. Keep a close eye, because it’s disgusting.