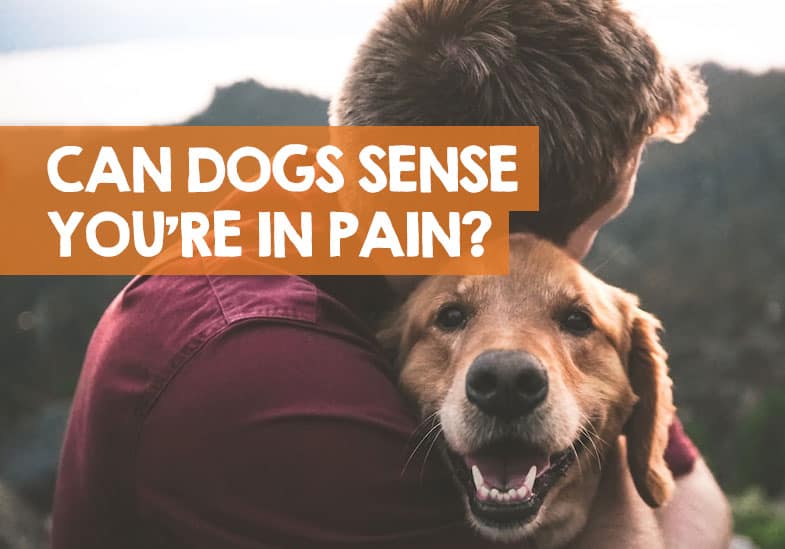 It’s no secret that our four-legged pals are intelligent creatures. They sense so many things out of the ordinary, with some even claiming that dogs can smell cancer. But how true is this, and can dogs sense when you’re in pain or have an illness?

Put simply, dogs’ senses can pick up on cues we often exhibit when in pain.

Want to learn more about these pain-sensing superpowers? Below I have referenced the research that proves dogs do sense when you’re in pain or ill, and how they act when doing so.

Do dogs sense when you’re in pain and hurting?

Dogs will often sense when you’re in pain and hurting. Our pets our not labeled “man’s best friend” for no reason. They see us in our worst state, and still choose to stay right by our side whether we’re healthy or have an illness.

Almost every dog owner can agree that you can’t mask your negative emotions from your dog, no matter how hard you try.

When you’re sad, scared, or upset, it’s easy to hide what you’re feeling from other people. But not your dog. They know when you cry, and will drop everything they’re doing to comfort you, leaving you wondering what made them know you were feeling a bit blue.

Dogs have unbelievable abilities that help them know when something’s wrong with us. So, if you’ve ever suspected that dogs know when their owner is in pain or suffering an illness, you guessed correctly.

Skinny, chubby, tall, or short, all dogs are smart enough to know when their owner is hurting.

Whether it’s an illness responsible for your physical pain or you’re going through a difficult time that’s knocked your emotional well-being off your feet, your dog can sense your distress.

But what’s not quite known is whether dogs truly understand the concept of pain and hurting in humans.

The common assumption is that dogs can’t relate to what pain feels like in the human body. The much they know is that things like injury or sickness are simply signs that their human best friend isn’t okay.

How dogs sense pain and hurting is pretty much like how they recognize when you’re happy or sad:

Handy Hint: Did you know that some people believe that dogs can sense an evil presence in a room, whether an evil person or even a ghost?!?

Your dog’s nose knows what’s up

The nose is the most powerful organ our wonderful canine pals have. It’s their sense of smell that helps dogs sense when you are in pain.

It only takes a few sniffs for your dog to know you’re in pain, thanks to their advanced sense of smell. Research published on phoenixvetcenter.com explains that a dog’s nose is over 10, 000 stronger than ours!

“They possess up to 300 million olfactory receptors in their noses, compared to about six million in us. And the part of a dog’s brain that is devoted to analyzing smells is about 40 times greater than ours. Dogs also have something called neophilia, which means they are attracted to new and interesting odors.”

It’s no wonder that dogs can smell when you are in pain or have an illness that might have changed your biological responses by just the smallest of percentages.

To understand better, think of this real-world scenario.

When the pizza you’ve ordered arrives, all your nose will smell is the typical pizza scent. But your dog will smell every ingredient and seasoning, the crust’s yeast, the body scent of everyone who touched the pizza box – basically every single thing!

It’s no surprise then that your dog relies on their nose to learn everything about your physical or emotional state. Dogs can even tell when their female owner is menstruating!

The hundreds of millions of scent receptors in your dog’s nose make it easy for them to pick up the scent of pain-triggered chemicals in your body. For instance, the stress hormone, cortisol.

When you’re unwell or in pain and hurting, you won’t be in a healthy state of mind. That means your body will release lots of cortisol.

Dogs can effortlessly smell hormones like cortisol and oxytocin (the “happiness hormone”).

On normal, pain-free days, your furry pal smells oxytocin in your body. So, the scent of cortisol will make them realize something is off with you.

Their ability to smell chemicals also explains why some dogs can detect serious illnesses like epilepsy, cancer, and diabetes.

Your dog might even throw hints when they sense a health problem is almost unfolding. You’ll see them licking or sniffing at a particular spot in your body.

One study explained on PsychologyToday.com found that dogs know when their owners are about to have a migraine and will try to alert them. They can smell and sense the sudden change in serotonin levels, a chemical in the brain that drops when one is almost having a throbbing headache.

“Dogs can be keenly sensitive to subtle changes related to the health of their owners. For example, seizure alert dogs can apparently sense imminent epileptic seizures. In a 2008 study, two thirds of dog owners suffering from Type I diabetes believed their pets knew when the owners were experiencing hypoglycemia, and the dogs engaged in alerting behaviors such as nuzzling their owner and barking.”

The mere fact that they act restless when they realize their owner is sick (or about to be) is a sign that dogs can sense pain and illness in you.

Your facial expressions and tone of voice show you’re hurting

When you’re injured or sick, the pain is written all over your face. Literally.

As you lift your chin up, squeeze your eyes, or wrinkle your nose, your dog sees all that. And they will know that something’s amiss since you don’t have the jovial, relaxed face they normally see you wearing on most days.

They know that a happy face goes with a cheerful voice, and a sad face with a sad voice.

If you’re in pain, your dog can hear it.

A group of researchers did a simple experiment involving thirty dogs. Each dog was handed a bowl of food, with two speakers attached to the sides of the dish. As the dog ate, pre-recorded human sounds of sadness, fear. happiness, anger, disgust, and surprise played.

Whenever the dogs heard fearful or sad sounds, their heart rates increased, and they’d take a while before proceeding with eating.

When you’re in pain, your dog will sense illness due to the sad and fear-like sounds you’re making — think of the soft moans, crying sounds, repeated sighing, or heavy breathing.

Your body language shows your pain

Another thing dogs are good at is studying our body language when we’re in pain and joining the dots.

Pain makes you exhibit negative body language cues like bending with hands wrapped around your belly. Or simply lying in a posture your dog doesn’t usually find you in.

They’ll also suspect you aren’t okay when you don’t pet them like you always do whenever they walk up to you. Your strange body language will let your dog sense that you are hurting.

How do dogs act when they sense illness

Most times, dogs don’t simply sense pain and leave it at that. Seeing you hurting worries them, and they will do what they feel is right for you at that moment. Look out to see if your dogs acts in the following ways when sensing illness

Can dogs sense when you are hurting?

Yes, that’s correct. Dogs can tell you’re in pain by sniffing the chemical scents in your body associated with pain.

They also sense you’re hurting by paying attention to your facial expressions, body language, and tone of voice.

How do dogs act when they sense illness?

When dogs sense illness, it’s common for them to want to comfort their ill owner.

And in instances where the owner doesn’t feel sick because the illness is yet to manifest, a dog may try to alert them with actions like constantly licking or sniffing a specific spot on the body.

Can dogs sense illness or death?

Yes, that’s right. Dogs can sense sickness or death, perhaps even understanding the death of an owner, mainly because of their powerful sense of smell.

You probably already knew what amazing senses your dog has. But keep a close eye on them next time you’re in pain or hurting. Dogs can sense illness and will often cuddle into you when you’re low.