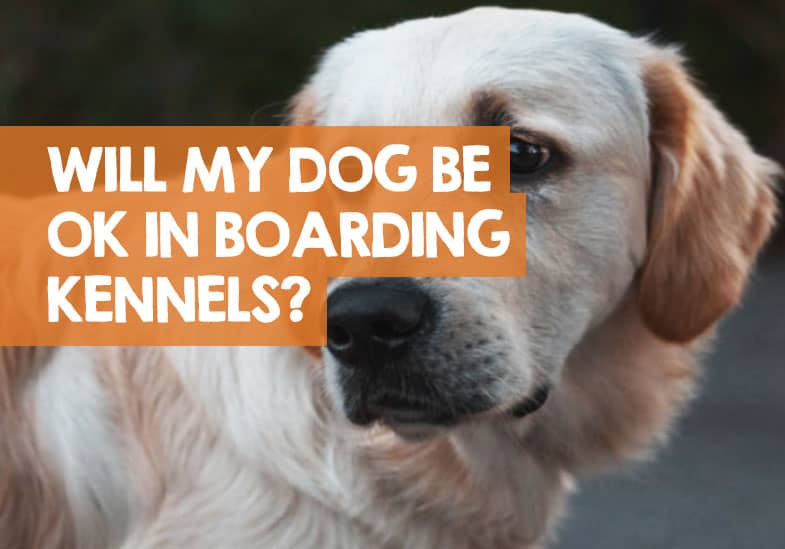 Most dog owners will have to leave their pet with other people at some point. Whether it’s a vacation or other commitment, having a good friend or family member who can look after your dog is an amazing luxury. But not everybody is this lucky, with some of us having to use boarding kennels.

The quality and reputation of boarding kennels can be quite a mixed bag, but thankfully government and state legislation mean it’s increasingly difficult to run a bad facility. But that doesn’t mean it’s not impossible.

There’s also the consideration of disease and stress, which all factor into why you might be worried about putting your dog in kennels.

I am worried about boarding my dog

In this guide, I will explain what you should worry about most with boarding, and what things you might be worrying too much about. Let’s start off with the care your dog will hopefully have – in most cases your dog will be ok!

1. Should I worry about unlicensed boarding kennels?

The first issue is legislation, which will differ depending on where you are. For example, in the UK, all dog boarding facilities need to be registered and licensed with the local council. Boarding kennels need to adhere to rules such as:

Local council are allowed to inspect dog boarding companies at any time.

In the United States, the legislation and certification will differ from state to state. As with the UK though, the facilities will be inspected to make sure they pass the rules on animal welfare and health.

If you are still worried about putting your dog in kennels, make sure you visit the facilities before you book. I’ve developed a guide which explains what to look for in a good boarding facility, and the questions you should ask before you sign on the dotted line.

2. Should I worry about dogs not being vaccinated

Concerns over your dog catching a disease and becoming ill are valid ones. The close proximity of dogs, playing together, and the overall environment can be a breeding ground of for some sickness bugs.

However, all dogs will need to be vaccinated before they enter the kennels meaning the risk of certain sicknesses are dramatically reduced. Dog owners need to provide proof in documentation that their dog is up to date with their boosters.

Most boarding kennels will also ask that visiting dogs have flea and tick treatment before they stay overnight.

Overall, disease is now rare in boarding kennels, but it still something you should worry about, particularly if your dog comes back from boarding and is acting differently.

It’s so rare, that I wasn’t able to find any cases of a large kennel cough outbreak in UK boarding facilities. But that doesn’t mean it can’t happen… kennel cough can be picked up anywhere and 65,000 dogs in the UK had it last year alone.

Handy Hint: Boarding kennels should not let dogs stay until they have vaccinations. This means a kennel taking dogs younger than at the very least 12 weeks of age should avoided at all costs. Here’s the age puppies should ideally be placed on boarding for the first time.

3. Should you worry about kennel cough then?

Boarding kennels cannot completely protect your dog against getting the condition. No matter how much they clean and sanitise the facilities, there is still a chance that your dog could catch this airborne virus.

But, due to the vaccination policies kennels have, it is reasonably unlikely your dog will catch it when boarding, but it is still a risk.

“In a kennel environment, a dog encounters two conditions which do not exist at home…proximity to a number of potentially contagious dogs, and the stress and excitement of a less familiar environment, which can result in lowered resistance to disease. But the more frequently a dog boards at a kennel, the greater are the chances that he will acquire immunity to the disease. Even during a widespread outbreak, only a fairly small percentage of exposed dogs are affected.”

Hopefully that last quote I found online will put your mind at ease a little bit.

4. Should I worry about my dog missing me?

This is a different one altogether; of course, you should worry about your dog in boarding and him missing you. I mean, you will miss him, won’t you? And you’d like to think it will be the same for your dog too.

Research suggests that some dogs do miss their owners when boarded. There have been multiple studies to see how dogs react when their owners leave, and all point to subtle changes in the dog’s behavior. I’ve written at length about this if you want to find out what the studies say.

However, don’t let that put you off putting your dog into boarding kennels. Not all dogs get sad when boarded, and most of the time it will be a positive experience for them.

If it’s a reputable boarding kennels they will get spoiled, lots of play with other dogs, and loads of attention.

5. Should I worry about boarding kennel stress?

This is one aspect that all owners should worry about when putting their dog into boarding. Kennel stress is very common, and can affects dogs of all sizes, temperaments, and characters, even if they have no previous form for anxiety.

Whether boarding is stressful for your dog or not will depend on many different factors including your dog’s character, the kennel environment, and events that take place during their stay.

Your dog will have to contend with possible changes to their diet, routine, aggression from other dogs, new smells, sounds, and being handled by new people. All of these can result in anxiety.

Many dog owners will often report a change in the dog’s behavior when the pet comes home. This can often be a sign of kennel stress, with symptoms being:

In most cases the stress levels will reduce once the dog is home, and it’s usually disappeared after 24 hours. If your dog still appears to be depressed after boarding, or is still acting oddly after a whole day, it’s probably best seen by a vet.

6. Should I worry that’s it’s cruel to put a dog in kennels?

Whilst a condition like boarding kennel stress is very real, not all dogs get it, and ones that do are fine as soon as they leave. As for cruel though, well, this depends on your dog and how the stay affects him or her.

Is it cruel to put a dog in kennels? If your dog suffers badly with separation anxiety and is in poor health, then yes, you could argue that boarding kennels are cruel.

But, otherwise, millions of dogs stay in boarding kennels each year will no ill effects.

In fact, one study I read seemed to suggest that rather than being cruel, some dogs actually love staying in boarding kennels.

The first study I found is in stark contrast to many other opinions which say dogs get depressed when staying in boarding kennels.

The research, published on ScienceDirect.com, explained how dogs were more active when in kennels. The results could be interpreted as showing that dogs actually liked to be boarded.

Dr Lisa Collins from the University of Lincoln said:

“This study suggests that although dogs appeared to have a higher level of overall arousal or excitement in kennels compared with their state at home, this arousal is not necessarily due to dogs experiencing kennels as negatively stressful. Findings appear to suggest that the dogs in this study did not perceive admission to boarding kennels as an aversive stressor and perhaps, instead, perceived kennelling as an exciting change of scene, at least in the short-term.”

Yes, you read that right… dogs could like being in kennels, and rather than being sad and depressed are actually excited by the proposition.

“Short-term kennelling did not seem to represent a negative stressor for these dogs. The emotional valence of responses was ambiguous, and no definitive evidence was found to suggest that dogs were negatively stressed by kennelling.”

The bottom line is, you won’t really know whether your dog will be ok in kennels until you try.

Most boarding kennels are run by animal lovers who will take exceptional care of your dog’s every need. He will get play, plenty of friends to hang out with, attention, and love. Possibly even more than you are able to give him at home if you have a busy life.

Whether your dog will be ok in boarding kennels or not is completely unknown until he’s stayed. All you can do is make sure you prepare your dog for the visit, and do your own due diligence on the boarding facility before you book.