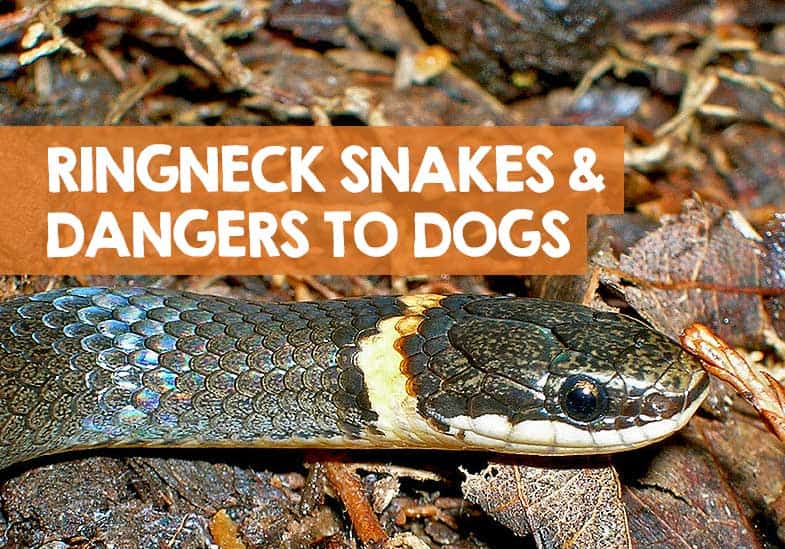 Summertime is the season of hot days, lazy weekends spent at the barbecue with friends, and fun walks in the local dog park with your four-legged friend. But summer also brings out the annoying critters and slithering snakes who have been hibernating during the cold winter months – plus those pesky ringneck snakes.

Ringneck snakes are most commonly found in America, Mexico, and some parts of Canada meaning dogs do get exposed to them. Whether ringneck snakes are dangerous to dogs though, is something I had to research quickly, and here’s what I discovered.

Ringneck snake venom may be harmful to smaller prey though. As a breed of snake, they’re found throughout most of the United States and are nocturnal creatures. They’re fairly rare and their secretive behavior means you don’t get to see them often.

Hopefully that should mean your dog should not have to encounter a ringneck snake, let alone be bitten by one.

Ringneck snakes and their possible dangers to dogs

I decided to find out more about this secretive snake. Whilst the ringneck snake is not dangerous to dogs from a poisoning perspective – in most cases anyway, it still carries some risks as I discuss below.

Are ringneck snakes dangerous to dogs?

While the chances of coming across a ringneck snake is minimal, if you’re out walking or hunting with your dog at night, you may stumble upon one (or two. They’re known to live in colonies of up to 100 snakes!).

Being the secretive creature they are, the ringneck snake prefers to stay out of sight. But if threatened by your dog they’ll curl up their tail to display their bright red or orange posterior on the ventral surface.

Sometimes, they’ll even roll over onto their backs to display their full, colorful ventral surface.

The ringneck snake is slightly venomous and can kill much smaller prey. However, they’re known to use constrictive behavior to kill their prey, rather than bite with their tiny, rear fangs. When threatened, a ringneck snake would rather retreat then fight or bite back.

With such tiny fangs, ringneck snakes will find it hard to break through your dog’s coat and skin. What could happen is when your dog is scooting around under wood debris and leaf litter and disturbs a ringneck snake who may strike and bite his nose.

If this happens, your dog will likely have a painful nose for a few days. It could be a similar reaction and pain to that of your dog being stung by a bee or wasp.

So, ringneck snake should not be poisonous or dangerous to your dog. But it’s always a good idea to get him or her checked out by the vet anyway.

What happens if a dog eats a ringneck snake?

We all know how curious our dogs become when they’re out and about outdoors. They’re forever picking up scents to follow, digging under rocks, and even chasing anything that moves.

An inquisitive dog will definitely show interest if he sees a snake slithering around.

If you dog happens to see a ringneck snake, he may be tempted to catch it and even eat it. This can be quite a disturbing sight. And the thought of a snake in your dog’s tummy is simply not something you want to think too much about!

But what will happen if your dog does eat a ringneck snake? Firstly, he may end up gagging on it as the snake may emit noxious odors in reaction to being attacked and killed. Your dog could start to drool and even have a bout of vomiting.

Handy Hint: I have written a more comprehensive guide on how dogs can get sick from eating snakes, what to look out for with symptoms, and what action to take.

Secondly, your dog may have some mild, gastrointestinal issues after eating a ringneck snake These are normally of no great concern but it’s always a good idea to keep a close eye on your dog for a few days.

Fourthly, snakes are known to harbor parasites and worms. While not definitive, if your dog happens to eat a ringneck snake, he may end up with a parasitic infection. Symptoms include vomiting and diarrhea.

I always recommend taking your dog to the vet should you have any concerns about your dog.

And one last tip, albeit low risk – a ringneck snake could be dangerous to your dog due to choking when eaten. Try to avoid this happening and keep your dog away from ringneck snakes.

What to do if a snake bites your dog

Oftentimes, a snake will strike so quickly and then disappear, that the chances of you seeing whether it was a ringneck snake or not is slim. The first thing you need to do is check out if your dog has been bitten.

If he has, you can clean the wound and get him to the vet for a full check-up.

If you don’t find a bite, then observe your fur-baby for the next few days. If it was a poisonous snake the following symptoms will present:

Other signs could include swelling around the bite area and pain. The most common places your dog will get bitten is on his face, his neck area, and his legs.

Handy Hint: Here are what the chances of survival are should your dog ever get bitten by a rattlesnake.

If you’re fortunate (or not so fortunate, depending on how much you like snakes!) to come upon a ringneck snake, you’ll discover it’s quite a handsome creature. They’re normally an olive, with tinge of blues and gray color with a distinctive red or yellow-orange band around the neck – this makes them attractive to dogs.

The neck band can also be indistinctive or a light, cream color which may confuse things a bit when trying to identify the snake!

The head is a darker color to the rest of the body, often black. Ventrally, the snake may have yellow-orange to red coloring with specks of black along the margins.

Adults measures between 10 to 15 inches with younger snakes measuring around 8 inches. These snakes have smooth scales, and the male has small tubercles on the scales in front of the vent.

Where do ringneck snakes live?

Ringneck snakes favor habitats that consists of rocky hillsides, open woodlands with plenty of cover, or even wetter or marshy environments with dense cover and debris. They like to take up residence in dens or holes deep underground.

They’ll also bury themselves under thick layers of wood debris or even burrow under rocks. This means that hopefully your dog will not get bitten by a ringneck snake in your yard.

When are ringneck snakes most active?

The ringneck snake is a nocturnal creature which means they’re more active at night. Your dog is less likely to see them during the day time. However, if your dog happens to disturb them while scuffling around in the woodlands, the snake will waken.

They’ll either slither away or take on a defensive stance.

On cloudy days, a ringneck snake may come out to warm up on a sunny rock or ledge. Like all snakes, they’ll hibernate during the colder, winter months.

I don’t know about you, but I’m always a bit cautious in those first days of summer when taking my dog for walks in the great outdoors. I’m wary of snakes and while I know they’re not all poisonous, I like to keep an eye out while my dog is scooting around in nooks and crannies.

If you do see this snake, and your dog happens to be bitten by a ringneck, I would say it should be fine… however, do talk to a vet. There’s no substitute for expert advice.