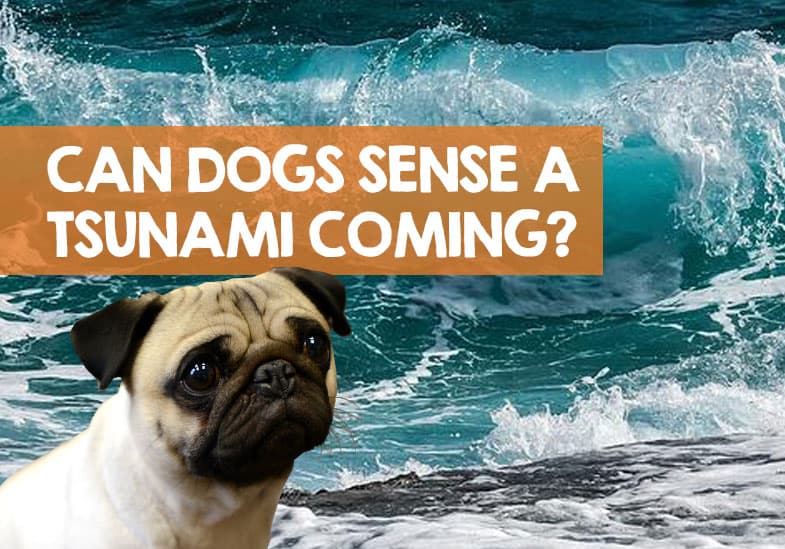 In recent years there have been several devastating tsunamis around the world. This has led to an increase in the rumor that dogs can dogs predict a tsunami before they happen. I wondered if there was any truth to dogs knowing when a tsunami wave is coming, so had a look into the available research. Here’s what I discovered.

Can dogs sense tsunami? Research suggests that some dogs can detect tsunamis before they happen. Various studies and anecdotal reports show that some dogs will sense changes in seismic activity including atmospheric pressure, sounds, and vibrations.

Research suggests that dogs get this special ability from their exceptional sense of hearing and smell. But dogs don’t need to feel the ground shaking slightly to know a tsunami wave is about hit the shoreline, as unlike us, they can detect it way before it lands.

Below I’ve put details of the research that explains the findings of the weird behaviors that dogs display when they suspect a tsunami is on its way. I’ve also included tips on how to save a dog from a tsunami.

The research to show that dogs can sense tsunamis

The 2004 Indian Ocean tsunami was an undersea megathrust earthquake that registered a magnitude of 9.1–9.3 Mw.

Ten days before the waves hit, there were reports of animals and pets, including dogs, exhibiting strange behavior.

The National Geographic reported that people described elephants retreating to higher ground, dogs refusing to go outside the house, birds leaving their natural habitats, and animals in zoos becoming anxious.

Several dog owners mentioned their dogs displayed strange behaviors, including excessive barking in the week before the huge tsunami.

Then the waves hit on the 26th of December 2004, leaving over 200,000 people dead, including thousands of pets and dogs too.

Some experts believe it was not a coincidence that dogs appeared to sense the tsunami before it happened.

However, their views were not able to 100% reliably state that dogs can sense an earthquake before it happens.

There has been more research though, most interestingly by Stanley Coren, PhD. He was researching Seasonal Affective Disorder in canines when, by happy coincidence he gathered data the day before a level 6.8 earthquake hit the Pacific Northwest. The AKC said:

“His data included activity and anxiety levels in 200 dogs living in Vancouver, Canada, a city that was affected by the quake. On the day before the earthquake, 49 percent of the dogs showed a significant increase in anxiety, and 47 percent were considerably more active. This was a sharp increase from the steady day-to-day averages collected to that point.”

As you probably know, an underwater earthquake is how tsunamis occur. So, it makes complete sense that if a dog can detect an earthquake, the same applies for sensing a tsunami coming.

There’s more research into this too.

According to Japanese research from 2011, dogs are able to feel an earthquake coming, therefore should also be able to sense tsunamis coming. Dogs will often bark and exhibit weird behavior, and the suspicion is that they can detect changes in the atmosphere, gravity, subtle ground movements, vibrations, and odors from the ground.

Another possibility for why dogs can detect earthquakes before they happen is being able to sense P-waves, which humans cannot do.

Before a tsunami strikes, P-waves will travel through the layers of the earth underground and under the sea. These waves occur in sequence:

Now, dogs can hear the first type of wave. The P-waves. That’s why our canine friends freak out way before the ground shakes.

They’ll know where these sound waves are coming from and what they signal (that a tsunami is on its way).

Plus, thanks to their exceptional sense of hearing, dogs can hear rocks rupturing below the surface and the sudden movement of groundwater (both incidents happen prior to an tsunami).

So, even before we feel the tremors, our canine companions can already sense what’s going on underground or under the water.

In a nutshell, a dog’s ability to sense an approaching tsunami involves detecting the different situations underground occurring almost at the same time.

Handy Hint: This sixth sense is the same reason why dogs know when a storm is coming.

How do dogs behave before a tsunami?

When a dog senses a tsunami is on the way, they will react weirdly, not just by barking excessively.

How to save a dog from a tsunami

If you’re a dog owner living in an tsunami-prone place, it’s important for you to know how to protect yourself and your dog when the rumbling ground movements start.

Here’s the thing about identification.

When a tsunami hits, many dogs go missing. If this happens to you (God forbid), your chances of reuniting with the canine love of your love will be higher if they have an ID.

Can dogs survive a tsunami?

Whilst the survival rate is probably low, there are accounts of dogs who have survived tsunamis in recent years. One well known example is Ban the dog. He was rescued from a roof drifting off Japan’s tsunami-battered north-east coast..

How soon can dogs sense tsunamis?

Unfortunately, there isn’t reliable evidence showing how soon dogs can detect tsunamis. However, it is believed that 2 months before a Japanese earthquake struck, dogs were already starting to react.

How do dogs act when a tsunami is coming?

As discussed earlier, they bark, howl or pant more than usual, become abnormally clingy, exhibit inappropriate habits like biting their owners, and act super restless to the point of trying to escape from home.

Did You Know? Research shows that dogs can sense when their owner is ill.

In conclusion, there’s enough anecdotal and scientific research to show that some dogs can sense tsunamis before they happen. However, it’s not possible to say for certain, how dogs detect a tsunami and seismic activity… this is pure conjecture currently.