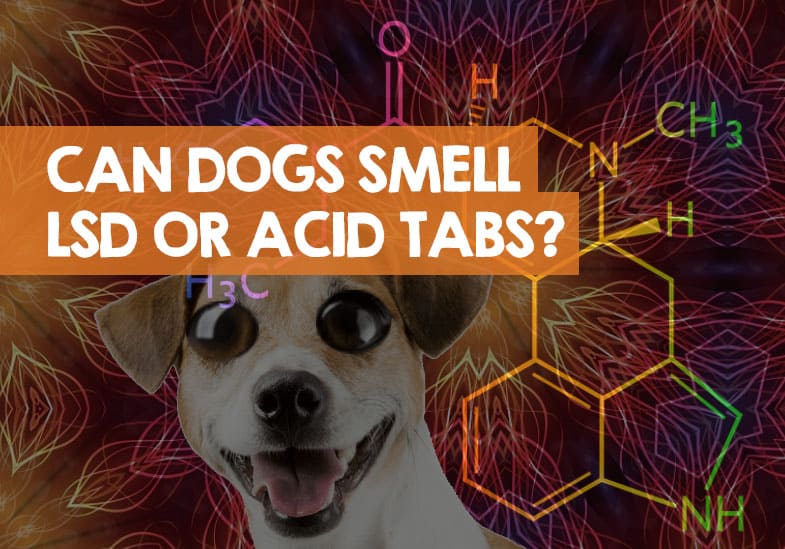 Police and customs have used dogs to help detect illicit substances for decades, and with good reason too. They have 300 million olfactory receptors in their nose. This means that have a sense of smell said to be 10,000 times better than ours. Combined with their ability to be trained, it makes them a key component for law enforcement as they sniff our narcotics.

These crime fighting pooches are seen working at customs, borders, airports, and even music festivals. But given the wide range of illegal drugs there are, can drug dogs smell acid, or are they even trained to detect LSD and tabs?

To get the bottom of this I read a lot of accounts by real-life police dog handlers who have shared their knowledge online. Here’s what I discovered with the short answer first.

Drug dogs cannot smell LSD as it is has no smell and is low in concentration. However, some highly trained police dogs maybe able to smell acid tabs by detecting the odor of chemical impurities produced in the manufacturing process or smell the cross contamination of banned narcotics.

Given how police dogs are only trained to detect between 3 and 5 different drugs, the police force is probably going to train them to alert on what are perceived to be problem drugs. Think of drugs such as methamphetamine, heroin, cocaine, and marijuana.

The bottom line is, police dogs can smell anything they have been trained to. For example, research published in 2019 found they dogs can accurately sniff out cancer in blood. If dogs can smell cancer cells, they can certainly smell chemical impurities used in LSD manufacturing.

However, unless a local police force is undergoing a strategy to bust a large LSD manufacturing ring, it’s highly unlikely the dogs will have been trained to smell for acid.

You will hear about drug dogs smelling out LSD, but this is probably due to the carrier of the acid having cross contaminated the tabs with another more detectable narcotic.

As far affirmation goes, I also found a quote on Quora from an anonymous source, so take it with a pinch of salt, but it stacks up from a common sense perspective:

“I have worked in law enforcement, and am a chemist. Now I concede that it is possible for a dog to smell chemicals that have the potential to be leftover in a batch of LSD, but that being said those chemicals are almost never present in any meaningful quantity.”

It’s very unlikely that you will encounter a police sniffer dog who has been trained to smell and detect LSD or acid tabs. There are a few good reasons why this is the case, and why it’s a safe assumption to make.

The first reason; it takes a lot of effort and time to train a police dog to detect drugs, with patience and time needed until the dog consistently alerts to the narcotic correctly.

Secondly, I don’t believe that many police or customs forces would put the work in so one of their dogs can smell acid. For me, it seems to be a waste of resources and money to do so.

Given the demand for certain drugs and their impact on society, it’s fair to assume that the majority of police sniffer dogs would be trained to smell for amphetamines, cocaine, and heroin.

Plus, from what I have learned, drug dogs can only be trained for around 4 or 5 drug types, so I would hazard a guess it’s going to the ones that society and government are most concerned with.

To conclude on my research and what would make sense, I think that there’s a very slim chance that drug dogs can smell acid tabs and LSD. That’s not to say it doesn’t happen, but it would be rare.

Handy Hint: Dogs have such an acute sense of smell that some women owners even report their dogs being more interested in them when they have a monthly period. I researched into why dogs might smell human female menstruation and what it can mean.

Does LSD have an odor?

No, LSD (lysergic acid diethylamide) in its pure form has no smell, which is why drug dogs cannot detect it.

“LSD is found most commonly in liquid form, which is clear, colorless, and odorless. The liquid is applied to blotter paper, which is cut into stamp-like squares or circles. The paper is applied to the tongue, and the drug enters the bloodstream through that membrane.” (view source)

According to police sources I found online, the only time a dog might be able smell acid tabs is if they have been trained to detect the chemical impurities from the manufacturing process.

Police dogs might still be able to detect LSD though

For example, a press report from Australia in 2016 had the headline of “Dogs sniff out LSD, MDMA and cannabis”. Reading that would make you think the Aussies must have some amazing dogs working for their police.

Here’s a quote from the article:

“During a search of the man, police found a sheet believed to contain 72 tabs of LSD, or acid… at the Pacific Hotel, a 25-year-old Yamba man was found to be in possession of 34 capsules of white powder, believed to be MDMA.”

A few things here; firstly, the LSD tabs were found once the dog had alerted the police to the man. Secondly, during the search they also found MDMA.

My suspicion here is that the police dogs smelled MDMA (they are trained for this) or the picked up the scent of another drug on the man. It’s highly possible that the LSD tabs might have also had some cross contamination on them from another narcotic.

Dogs can smell out and signal for anything they are trained to do, providing it has an odor scent.

Given that we know dogs cannot smell acid, if police or airports wanted to instead train their sniffer dogs to smell for certain chemicals commonly used in the production of LSD it would require the following process:

In the training game, dogs are taught to locate the smell, sit down and point with their noise where it is.

However, LSD is a different proposition due to the lack of odor, plus the rationale that police and customs probably don’t believe it would be a good use of resources to train dogs to detect it.