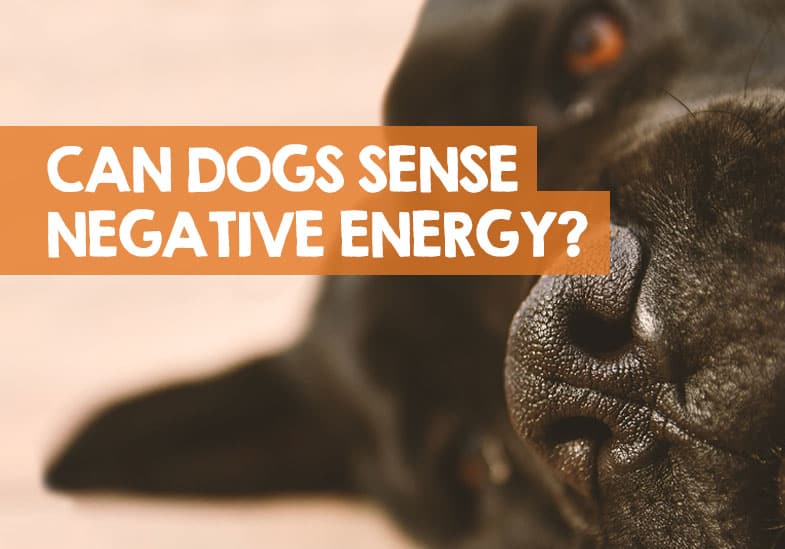 Many dog owners believe that their dogs have heightened senses, and by that I don’t mean the obvious ones like their sense of smell and hearing. Instead, I am talking about how dogs sense bad energy and negative emotions.

But how true is this, and has there been any research into dogs being able to sense bad vibes? I investigated it, and here’s what I discovered.

Can dogs feel negative energy? Dogs can sense negative energy in so far that they have heightened senses compared to us including their hearing and smell. This means they can feel and sense subtle clues in body language and bad behavior that we might not.

Now obviously it’s very hard to quantify what negative energy is, and whether it even exists. But if we define negative energy and bad vibes as being clues in a person’s behavior, then there’s every chance that a dog will notice.

Based on this broad brush of assumption, you could say that dogs can sense bad vibes and possibly recognize those who may have bad intentions. The next time you notice your canine friend acting weird towards a particular person, don’t just assume they’re in a bad mood. Your dog might have sensed something suspicious.

Whilst there is no science that proves negative energy, there is research into how dog’s senses are very attuned to changes. We also now know they have good long memories, but poor short memories.

How can dogs sense bad vibes and negative energy?

If there was an award for pets that make the best judges of character, dogs would win the day.

As a dog parent, you’ve probably seen how your pooch acts around people. Some get the special treatment, while others get a taste of your dog’s not-so-pleasant side.

There are days you’ll bump into a friend while taking your dog for their usual evening stroll, and you’ll get to catch up with them without your canine buddy causing a scene.

Other times, someone will randomly stop by your house. And even before you exchange pleasantries, your ever-friendly dog is almost chasing them away.

That’s because your dog can tell what energy people give off and sense their intentions.

Dogs have a far superior sense of smell to humans, over 10,000 times stronger than that of humans.

This is one of their special skills which can help dogs feel negative energy by sensing who’s shady and who’s the good guy. To prove this (or not), we need to think back to the biology lessons we all learned in school.

When someone has evil intentions, they’re often nervous. Plus, two major things go on in their body:

Since adrenaline rush activates the sweat glands, a person with bad intentions is likely to sweat more (but not the type of sweating that’s easily visible to the human eye).

And as their heartbeat increases, so will blood flow in their body. The blood will carry the panic-related chemicals closer to the person’s skin pores.

Since our canine friends have a fantastic sense of smell, they can quickly sniff the scent of sweat from a nervous person… which is one way in which dogs sense negative energy – the bad person gets smelly!

And here’s the most interesting part.

Research shows that a dog’s olfactory system, which includes the nose and other nasal cavities, has a powerful capability that we humans lack — smelling chemical substances that nearly lack an odor.

That includes the almost-odorless scent of the fear-triggered chemicals that move closer to the skin surface when a bad person is nervous.

So, such a person might try to mask their true intentions from you, but they can’t fool your canine buddy. At all… your dog will sense bad energy by its scent.

And I don’t doubt their ability one bit.

I mean, If our canine friends can sniff out blood sugar level changes in diabetic people (yep, that’s how powerful their sense of smell is) or a small leak of carbon monoxide, then smelling the chemical changes in people with bad intentions isn’t impossible!

In 2018, a group of scientists did any interesting experiment to find out whether our four-legged best friends can smell fear in people.

They requested a few volunteers to watch different short videos, a video at a time. The videos were categorized in three forms — short clips to ignite feelings of fear, feelings of happiness, and lastly, neutral feelings.

It was expected that the volunteers would sweat when watching a video from each category. So, the idea was to collect the sweat samples, present the samples to dogs and observe their behavior.

The findings were surprising.

This is possible proof that dogs can feel negative energy and sense bad vibes by smelling the chemical and sweat scents our bodies emit when we’re scared. Fear is part of negative energy.

Our furry friends are also experts at studying body language

Think of what a detective pays attention to when questioning a crime suspect. Their body language, right?

In the same way, dogs can read a person’s body language and know if someone is up to no good and has bad vibes and bad energy.

For example, someone with bad intentions and negative energy might have a stiff posture and intensely stare at a dog straight in the eyes. The dog will interpret that this person is a potential threat.

Dogs also use our facial expressions and tone of voice to gauge our moods. The type of energy we give off is evident in our moods.

If someone displays negative facial expressions while raising their voice at you, your canine friend will conclude that the person has negative vibes.

Your dog views specific facial cues and the loud tone of voice as threatening.

Now you know why your furry best friend is hardly friendly towards someone who’s being rude to you… your dog can sense the negative energy in them as a “bad person”.

Some people believe dogs do sense evil spirits. But truth is, there isn’t solid scientific evidence proving that this is true. We’d have to prove evil spirits exist first before claiming dogs can sense them.

What do dogs do when they sense a bad person?

If your dog senses someone is a bad person with bad intentions, they’ll react in a manner that suggests they are uncomfortable or fear being around this person. Here’s what to expect:

Dogs can tell if their owner has negative energy

Your facial expressions, body language, actions, and tone of voice are enough to make your canine best friend conclude that your energy doesn’t feel right.

Also, the energy your dog dishes out is a reflection of the type of energy you radiate.

Look at it this way.

Imagine you’re dealing with a hectic week. Crazy back-to-back deadlines at work. Pending bills you need to sort out before the week ends. You’re worried you might miss your kids’ soccer practice for the second time in a row because of your tight schedule.

And everything chaotic in-between.

Your energy at home during this period will be nowhere close to cheerful and relaxed — just mood swings on steroids!

Your furry friend will “feel” this energy and respond to it negatively. That means they’ll also show signs of stress and anxiety.

In other words, when it comes to our canine companions, what you give is what you receive.

What do dogs do when they sense a bad person?

As discussed earlier, when a dog senses a bad person, they’ll behave as though they don’t trust or like the person — For instance, growling or barking at the bad person, running away from the person, and hiding behind their owner.

Yes, that’s right. Dogs know if a person has positive or negative vibes.

Can my dog feel my energy?

Yes, your canine friend can feel your energy. They’ll observe your actions, body language, tone of voice, and facial expression to know if your energy is negative or positive. In addition, the energy you display will be the same energy your dog will exhibit.

Can a dog sense a spirit in the house?

There’s no evidence pointing to this, meaning the idea that dogs can sense evil spirits isn’t scientifically true.

Many of us consider our canine companions the perfect dog versions of “Mr know it all”. Dogs for sure seem to know everything about humans! But the real question is, are they smart enough to recognize evil or negative energy?

Well, this all depends on how you define negative energy.

If you believe it’s behavioral and physiological, then yes, dogs can sense bad vibes in people.