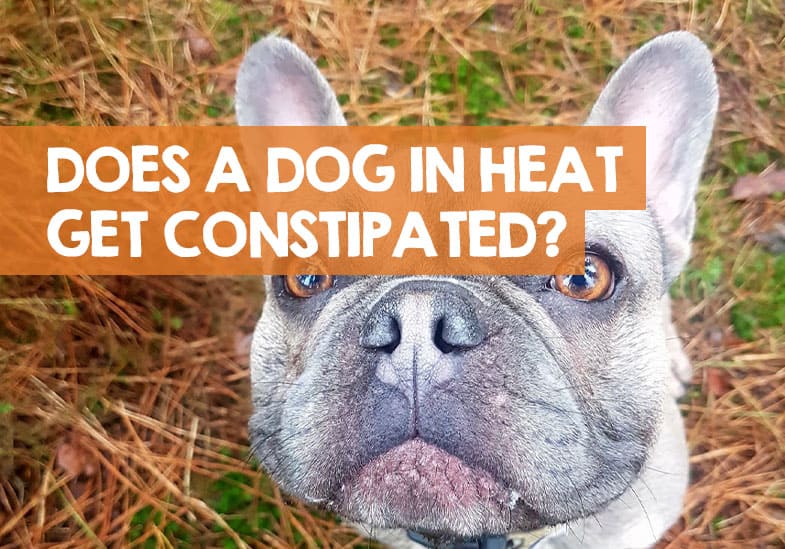 When you dog is in season, she can exhibit many different symptoms and changes in her behaviour. One that some owners have reported, but isn’t widely spoken of, is constipation, and whether it’s connected to the dog being in heat.

Whilst not a common symptom or side effect, some dogs can get constipated when in heat. It’s most likely due to a gastrointestinal tract issue. Dogs in heat are known to develop GI tract issues when in season.

But how does this then lead to dogs getting constipated when in season?

Well, it’s possibly due to the hormone levels rising (and then falling). It’s known that this can cause stomach upsets in dogs, but possibly constipation too.

It’s a known fact that women during and before period can become constipated. The Healthline website says:

“Before your period starts, progesterone builds up in your body. This can slow down your digestive system, possibly resulting in constipation just before and during your period. There’s also a theory that rising estrogen, not progesterone, is the real culprit.”

Given that female dogs have both progesterone and estrogen, both of which are active during the proestrus and estrus stages of the heat cycle, it’s likely dogs will also become constipated.

Did You Know? It’s possible that dogs can sense when a woman is on her period.

The following are comment was made by a pet owner who reported their dog getting constipated when they’re in heat.

“We got home this morning to find that our dog had left a very small, dry, and hard poop on the kitchen floor. This was the first time she had pooped in 3 days. She normally poops when we take her out into the yard every few hours, at least twice a day. She’s not pooped since so I suspect our dog is constipated from the cramps of being in heat, like how women have the same issues on their cycles as well.”

When this comment was posted online, a vet replied saying that if the dog in heat is still constipated in a couple of days and is showing signs of distress or illness, a vet should be called.

This can include butt scooting, crying in pain, and squatting frequently.

I am not a vet, so cannot offer any advice on what to do when your dog in heat is constipated. However, there are some common ways other people online say they treat constipation in canines.

Common behaviors of a female dog in heat

As well as the reports that dogs can be constipated while in heat, there are also other behaviors and physical symptoms your female dog will exhibit when in season.

In short, yes, dogs can get constipated when in heat due to the hormonal changes that are going in their body in season.

If it doesn’t pass in a few days, make sure you consult with a vet to help ease any discomfort.