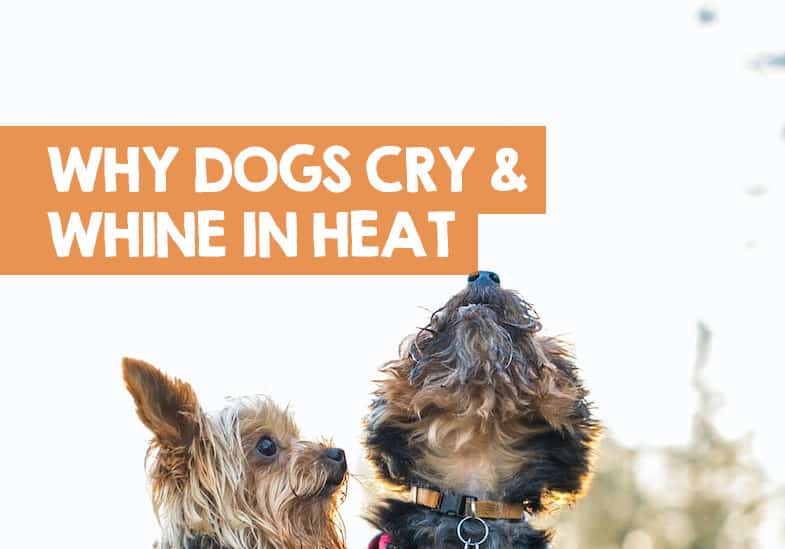 Female dogs will exhibit many behavioral changes when in heat. One which is the most concerning to pet owners is whether a whine, cry, or howl, is connected to what’s going on with them at that point in time.

Dogs do cry and whine when they are in heat. Female dogs can be very vocal during their heat cycle, and this can manifest itself with whimpers, whines, cries, howls, and even barking. It is normal for dogs to cry when in heat, and the reasons why are below.

I’ve also included some tips on how to comfort your dog when she cries in heat. The crying can be very worrying, but once you’ve read the guide below, I hope you’ll be in a better position to understand the howling during mating season.

Why do dogs cry when in heat?

Our little canine friends don’t stay little forever. As your female puppy grows into puberty, you won’t fail to notice. Maybe it’s how her cute chubby legs suddenly seem thinner. Or how slightly taller she looks.

But it’s not just the physical changes that reveal your four-legged companion is becoming mature. Seeing her enter her first heat cycle (estrus) will also prove that you officially have a furry adolescent in the house!

If your furry friend doesn’t undergo spaying, she will experience estrus for as long as she lives.

Depending on her breed, she may have two or three heat cycles each year. There are many odd behaviors to expect from your dog when she is in heat, like lots of whining, crying, and possibly even barking and howling.

The constant howling and whining will make you wonder what on earth is wrong with your dog. Just so you know, she isn’t trying to intentionally get on your nerves – it could be a cry for help and attention… amongst other things.

1. Whining due to discomfort and anxiety

The heat period, which experts say lasts anywhere from two to four weeks, comes with many hormonal changes in a dog’s body.

The glands releasing hormones that regulate your dog’s moods begin to function differently, creating a hormonal imbalance that messes up her moods. Your dog will have anxious thoughts, making her whine and howl too much.

And it doesn’t end there.

As your dog’s body prepares for mating (that’s what the heat cycle is about), pregnancy-related hormones take over her body. The sudden flood of these hormones will makes your dog experience discomfort (such as cramps), which she will express through crying.

Besides the howling and whining in heat, you’ll also notice the following:

It’s not an easy time for her. The least you can do is offer your furry friend emotional support when she’s in estrus. For instance:

2. Howling due to strong sexual urges

Another reason why dogs howl when in heat is due to them wanting to find a mate. The excessive crying is her clever way of grabbing the attention of the male dogs outside.

Apart from acting overly affectionate towards you, your dog will cry, pace around the house, or mount on stuff to let you know she wants to be out there with the canine love of her life.

And if she gets any opportunity to sneak out, she will be the happiest canine alive! Not even crossing busy highways and the thought of getting pregnant accidentally will stop her.

3. Crying due to boredom

When your dog enters heat, even the slightest boredom can make her whine her lungs out.

Her idle mind will remind her she should be out there pursuing a mating adventure. Boredom is often why most dogs in heat tend to be quite destructive.

If she’s locked up in the house with nothing to do, she may take out her sexual frustrations on your cushions, shoes, and anything chewable she finds. You can kill her boredom by:

Those are the 3 top reasons why dogs whine when in heat, but I’ve only covered the females so far. Male dogs will also howl and cry when a female is in heat.

Why male dogs cry when a female dog is in heat

It’s also quite common for male dogs to cry and howl when a female is in heat. It all because of how intense their sexual urges become as soon as they sniff a female dog in heat.

Even if your furry friend in heat is right inside the house, other male dogs can smell her from miles away and know she needs a mating partner and will start to whine and howl to get her attention… hopefully.

The discharge from your dog’s vagina when she’s in heat has sex pheromones (chemical scents). Research shows there’s a name for these pheromones — Methyl p-hydroxybenzoate.

Your furry friend’s urine is also packed with these pheromones during the heat period.

Since our canine pals generally have an extraordinary sense of smell, a male dog will get a whiff of these chemical scents and become instantly aroused. All he will want from that moment on is to hunt down the canine queen and mate with her.

The constant crying, whining, and howling is your male dog’s way of vocalizing his sexual desire. It’s also his attempt to respond to the cries coming from the female in heat.

You’ll notice your male dog behaving erratically — like trying to escape and acting somewhat aggressively for locking him up. Let’s just say that living with an intact dog can get chaotic.

Spaying or neutering will stop the annoying estrus-related crying

Some dog parents don’t entertain the thought of spaying their furry friend. But the truth is, this medical procedure will benefit not just your dog but also you.

She won’t ever have to deal with heat cycles and the frustrations that come with these cycles.

And most importantly, your furry friend won’t be part of the 24% of dogs that often die of Pymetra — a deadly uterus infection that affects dogs that still have their uterus.

As for you, spaying will go some way to ensuring you don’t have to worry about your dog running away or getting reproductive cancers. But, a spayed female can still attract males, it’s not entirely foolproof.

That said, in most cases, neutering will save you the headache of dealing with a male canine friend who’s always out of character because of his sexual urges. Plus, this procedure will eliminate your dog’s risks of getting male reproductive cancers.

FAQs on dogs that whine when in heat

Is my dog in pain when she is in heat?

Generally speaking, dogs in heat experience mild discomfort. Not intense pain. She might have period cramps, which you can help to relieve with these tips.

How to comfort my dog when she’s in heat?

You can spend more time with her as you pet her, give her healthy treats, ensure your home environment is peaceful, and take her for short walks.

What are the first signs of heat in dogs?

Do male dogs cry when in heat?

The short answer is no. Male dogs don’t have heat cycles. They cry when aroused by the scent of a bitch in heat, and in response they will howl back to the female’s cries.

Do dogs howl during mating season?

Yes, dogs do howl during mating season. It is their way of alerting other local dogs to their mating availability and will often results in more dogs joining in with howls and whines.

Do dogs bark more when in heat?

Female dogs will often bark more when in heat. As with the whines and cries, it’s their response to pain, discomfort, sexual urges, and possibly boredom.

How does a female dog act when in heat?

A female dog in heat will act differently to usual. This can include urinating frequently to sudden mood swings, over-grooming, and flirtatious tendencies, among many others. In short, when your canine friend enters heat, you’ll see a totally different side of them.

It is perfectly normal for dogs to cry and whine when in heat. And what’s also interesting is how it can kick off male dogs whining too, in a classic mating season response.