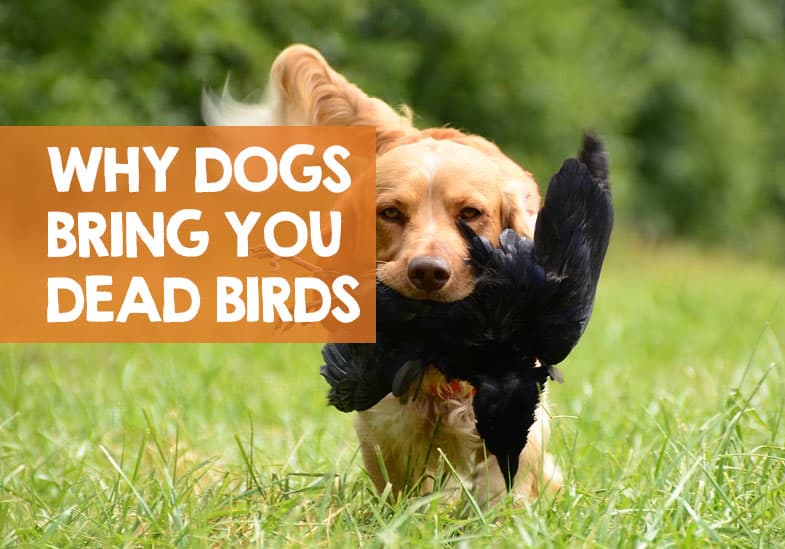 If your dog has the run of an outside area, perhaps a garden or yard, then you may be familiar with their annoying habit of bringing you dead birds. This is quite normal behavior and makes sense, particularly when you look at the reasons for why your dog brings you dead birds.

I own a French Bulldog and you might assume they don’t have much of a hunting instinct. In fact, the opposite is true as he loves chasing birds and squirrels at the back of our house. Only last week he brought a dead bird into the house for me, so I decided to see what this could mean. I can share those findings with you today.

4 Reasons why your dog brings you dead birds

I contacted vets and animal behaviorists on social media, asking them in a tweet; why do dogs kill birds and bring them home? I had some really interesting responses which I’ve paraphrased and collated into different meanings below.

What was interesting too was how a few of the experts told me that when a dog brings you a dead bird home, it doesn’t mean they actually killed it. Sometimes they are bringing you dead birds that they have found already dead… I suspect that’s what my dog did!

Here are those suggest reasons to what it could mean.

1. Because your dog sees you as the leader of the pack

One of the more popular comments on what it means when your dog brings you a dead bird is that it’s related to pack mentality. In days gone by, your dog’s ancestors would have belonged in a wild pack with a clear hierarchy.

You see this behavior in the animal kingdom with wolves and big cats, and domestic dogs still have elements of this in their genes.

There is a theory that kills birds and bring them home for you because they see you as the leader of their pack. What better way to show their respect and submission to you than a valuable gift of “food”?

I can imagine the following thought running through my dog’s head as he brought the dead bird back to me last week:

“I am a valuable member of the pack, look at how clever and faithful I am to bring you this tasty bird home. Please let me stay in our pack, I am useful, clever, and faithful to you!”

The next time your dog brings a dead bird home for you, he probably just wants the praise and recognition that only you as the pack leader can give him.

Handy Hint: I’ve compiled 21 signs that you dog respects you as the pack leader. How many can you tick off?

2. Because your dog wants to teach you

An alternative theory is that dogs look at us as inexperienced hunters and want to teach us how to stalk, chase, and kill prey. What better way to do that by plonking a dead bird on the doorstep to show us stupid humans how it’s done?

It could be that all of this time, rather than looking up to us, our dogs have actually been pitying our poor hunting skills. I mean, let’s face it, in these days of online shopping and Alexa devices it’s never been easier to order up our next meal without having to go out and work hard to catch it!

You can just imagine our dogs looking at us with scorn as the groceries get delivered bagged up and fresh on the doorstep.

Our dogs might think that where’s the fun and skill in all of that… and then decide to show us how we should really be doing things by delivering a dead bird to us fresh and direct.

3. Because your dog just wants to say thanks

Alternatively, it might be that your dog just wants to say thanks and that they love you for all you do for them. We feed them, play with them, walk them, put a cosy roof over their head and accept their unconditional love in return.

A dead bird delivery could be their way of giving you thanks. We might say it with flowers, but perhaps dogs say it with a rotting and maggot-infested bird carcass instead? Dogs do love very smelly things after all!

This also reminds me of an article I wrote last month with included comments from scientists who believe dogs might think we humans are their parents. If that is the case, then it makes perfect sense that they might want to reward us with a dead bird treat.

4. Because your dog wants to show off and get attention

Dogs are show-offs. You only need to see how they roll around in nasty stuff like horse poop and then act like it’s the most amazing thing ever to realize this!

The final theory offered was that by bringing you a dead bird it could mean your dog just wants to show off and get attention from you.

Often dogs will exhibit behavior to get a reaction from their owners. You see that with dogs that are destructive in the home due to something lacking their life such as love, exercise, and attention.

Alternatively, they might just think that by bringing a dead bird home to you, you’re going to think how clever and awesome they are!

Handy Hint: Squirrels drive my dog completely crazy, here’s why and what you can do about it.

Dog most likely to bring you dead birds

There are certain breeds that are more inclined to bring dead birds home to you. Typically, this will be the dog breeds who have evolved for herding and those with high prey drive.

Whilst it’s not set in stone, here are some of those breeds who are more likely to exhibit this behavior.

If we take the Beagle breed as one example, they have been bred by humans for their hunting ability with enhanced hearing, vision, and smell. In fact, the reason they have long and floppy ears is actually to help them pick up scents – you can find out why here.

Any of the breeds above are excellent at hunting and tracking and will stalk, chase, and catch all kinds of prey, but in particular smaller mammals such as rodents and birds. They have high energy and super-honed skills which let them sneak up on birds and then make a deadly pounce.

This is why bird hunters will be accompanied by these breeds as they are great at finding and retrieving birds for their owners. It’s certainly an instinctive thing for them to find and bring dead birds back to base and doesn’t necessarily mean they are vicious killers!

However, that doesn’t mean it’s only going to be well-trained hunting dogs that kill birds and bring them home. All dogs have the instinct to act as hunter gatherers; it’s in their DNA and genes.

How to deal with a dog bringing a dead bird home

Whilst it might be your automatic reaction to recoil in horror at the dead bird, scream and shout, scold your dog, and flick the carcass into the nearest bin, this isn’t the best approach.

Firstly, there’s nothing wrong with your dog killing a bird and bringing it home to you. It’s an instinctive thing, so don’t panic and think something’s wrong; it’s not.

Next check to see if the bird is actually dead. It might be playing dead when scared of the dog, so if still alive you might be able to rescue it by gently taking it from your dog.

Above all though, don’t be angry with your dog. If anything, I would praise your dog because as far as he’s concerned, it’s something good that he’s done. If you’re angry that will send very confused messages and your dog simply won’t get it.

If the bird is definitely dead, wrap it carefully in paper and bags. Double or even triple bag it and dispose in your bin. That way it should mean your dog can’t smell it and drag it out again when you least expect it.

Handy Hint: I’ve written a more extensive guide which explains what leads dogs to kill birds and small mammals in the first place, and how DNA and genes plays a huge part in the chasing behavior.

There’s nothing wrong with your dog bringing you a dead bird. It doesn’t mean your dog is a psychotic killer, and actually he might have just found it. I actually suspect my dog Claude, picked a bird up that our cat had got too, as it didn’t look that fresh!

Either way, he’s probably just trying to please you.

Dogs love to do disgusting things, but there’s usually good reason why they do it. I’ve blogged about lots of gross things like this in the past, and here’s a selection of some of the most popular.